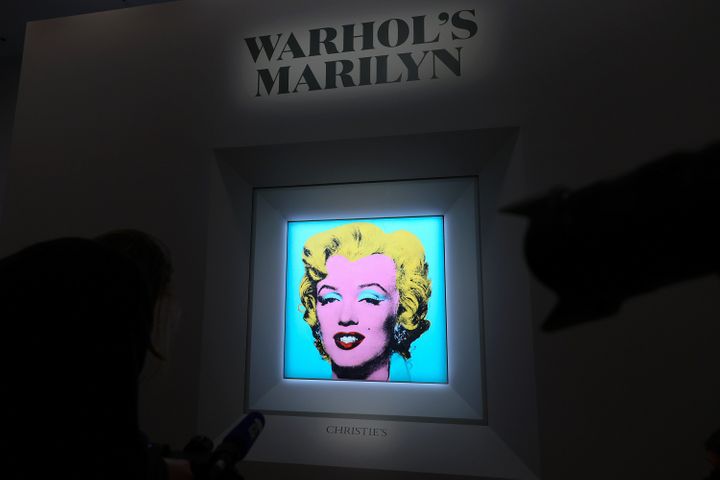 Andy Warhol’s “Shot Sage Blue Marilyn” portrait of Marilyn Monroe is going up for auction in New York Monday for an anticipated $200 million.

If it actually sells for that, Christie’s “Lot 36A” — the signed and dated (1964) acrylic and silkscreen ink-on-linen piece — will become the most expensive 20th-century artwork ever to sell at auction. Picasso’s “Women of Algiers” currently holds that honor. It sold for $179.4 million in 2015.

Christie’s has been projecting an image of the artwork, from the Thomas and Doris Ammann Foundation Zurich, onto the facade of Rockefeller Center in Manhattan since April 29 and will continue to do so until May 13.

Joan Robledo-Palop, a collector and CEO of Zeit Contemporary Art in the city, called the excitement over the sale “unprecedented.”

Alex Rotter, head of 20th- and 21st-century art at Christie’s, has called the portrait “the most significant 20th century painting to come to auction in a generation.”

The 40-by-40-inch work is part of a series of portraits the pop artist made of Monroe after her death from a drug overdose in August 1962. They became known as the “Shot” series after a visitor to Warhol’s “Factory” studio in Manhattan fired a gun at them, piercing the portraits, which were later repaired.

Christie’s describes the work as having the “classical beauty of the ‘Venus de Milo,’” and labels it “a modern ‘Mona Lisa’”

It credits Warhol with single-handedly cementing the “myth” of Monroe, due to the artist’s “unique ability to capture the humble beauty of a global superstar.”

The work is “Warhol’s ultimate depiction of his ultimate muse,” which highlights Monroe’s “full lips,” “voluminous curls” and…