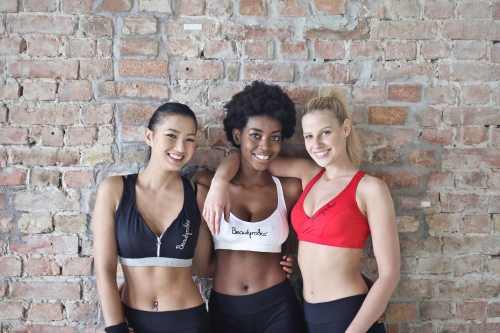 Adidas are making waves with a forward-thinking advert for women’s sports bras, in which they unveil 25 very different pairs of women’s breasts in all colours, shapes and sizes to show that all women are being catered for no matter what their body type.

Support is everything.
Whatever the sport, women deserve freedom and comfort to move however they choose. That’s why we redesigned our sports bra collection to cater for more women, more bodies and more sports.
Explore the new collection 👉 https://t.co/SxPuByb4nU pic.twitter.com/SgJNkc5PIj

“We believe women’s breasts in all shapes and sizes deserve support and comfort,” they wrote alongside the image, released back in February. “Which is why our new sports bra range contains 43 styles, so everyone can find the right fit for them.”

But this isn’t a celebratory piece about progressive advertising moving away from a sexualised view of women’s bodies to a liberated view of them, but a protest piece against the Advertising Standards Authority (ASA) who have banned the commercial as being likely to “cause widespread offence”.

Apparently, the ASA had received 24 complaints of gratuitous nudity and female objectification. If it were gratuitous nudity, we’d be looking at more than breasts. Meanwhile, female objectification is using bodies to sell products that are nothing to do with the body; frankly, showing the body part on which the product is going on isn’t objectifying anyone, it’s truthful advertising.

There were also concerns that the advert may be seen by children, though the ASA failed to express how it might traumatise, confuse or indeed have any effect whatsoever on our youngsters

“We considered that the image was not suitable for use in untargeted media, particularly where it could be seen by children,” the ASA said in a statement. “We concluded that (the posters) were inappropriately targeted, and were…