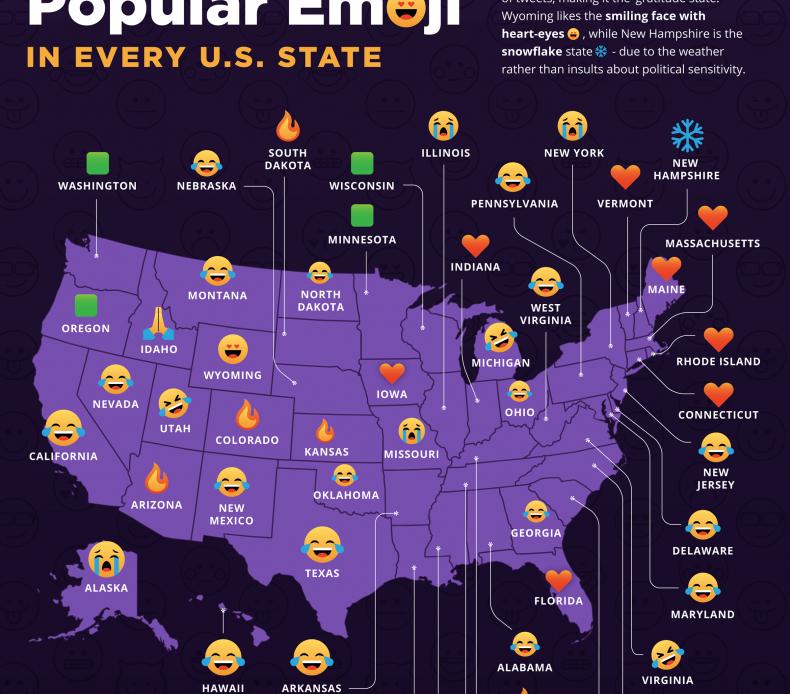 Emojis have become part of everyday life and our vocabulary, with many people relying on them heavily as a form of communication.

In-jokes, subtle references and even NSFW words are now expressed via an animation, which now number 3,633 emojis as of last September, according to Emojipedia.

While we all have our favorites, now each state’s, and the country’s, most-used emoji has been revealed, after millions of tweets were analyzed.

Website Crossword-Solver revealed the most popular emoji in the U.S. is the laughing crying face, as well as in 75 other countries, while it’s also the number one globally.

Such is its popularity, the emoji was even named Oxford’s Word of the Year in 2015, as they noted: “That’s right—for the first time ever, the Oxford Dictionaries Word of the Year is a pictograph: [emoji], officially called the ‘Face with Tears of Joy’ emoji, though you may know it by other names.

“There were other strong contenders from a range of fields but [emoji] was chosen as the ‘word’ that best reflected the ethos, mood, and preoccupations of 2015.”

“Grids of green, yellow, and white squares began appearing on Twitter at the end of 2021 as users reported their results on the word game phenomenon Wordle.

“By March 2022, there were 15 million such tweets—and the colored squares were all among the ten most commonly used…