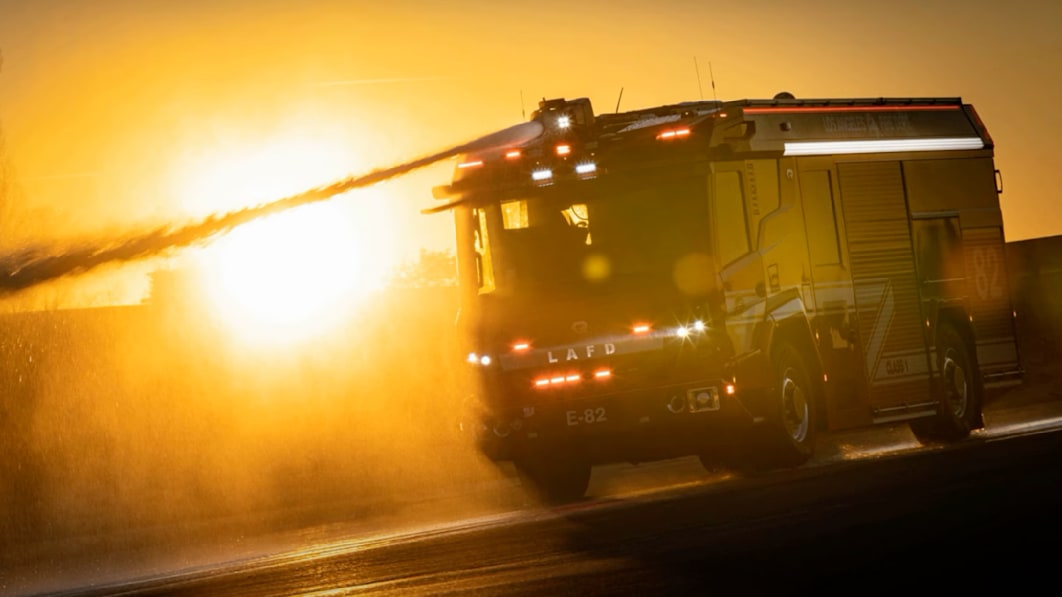 Way back in 2020, the Los Angeles Fire Department (LAFD) announced an order for an electric fire engine from Austria’s Rosenbauer Group, one of the world’s largest makers of fire trucks. It took two years, but the truck was finally put into the LAFD fleet at a ceremony last weekend, delayed due to ongoing effects of the Covid-19 pandemic. According to Firehouse.com, this is the fourth such electric truck in the world. The others are in Berlin, Amsterdam and Dubai.

The Rosenbauer RTX is an electric fire engine platform that is customizable by the department placing an order. In the LAFD’s case, two battery packs supplied by Volvo Penta supply 132 kWh of energy capacity to a pair of electric motors — one at each of the two axles — with the juice to offer 360 kW of peak power or 260 kW of continuous power. That’s the equivalent of 490 peak hp or 350 continuous ponies. Backup power is offered by a 300-hp BMW-supplied inline-six engine that runs on diesel fuel and serves as a range extender. Both the batteries and diesel engine can also be used to pump up to 1,500 gallons of water per minute.

The truck is fitted with seating for seven occupants. It has an air-adjustable suspension system that can raise from its low of 7 inches of ground clearance up to a maximum of 19 inches for off-road travel or to ford deep water. All-wheel steering can be configured in both counter- and crab-steering modes.

The engine has been assigned to LAFD Station 82 in Hollywood. The Rancho Cucamonga Fire District also placed an order for the electric fire engine, and it’s expected to take delivery in 2023.