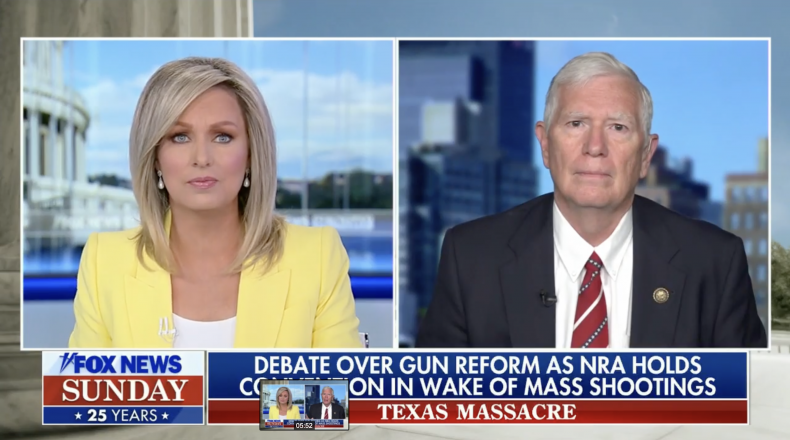 A mass shooting at Robb Elementary School in Uvalde, Texas, on Tuesday left 19 students and two educators dead. In the wake of the horrific violence, Democrats and some Republican lawmakers have called for gun reform legislation in an effort to prevent future tragedies. Meanwhile, strong Second Amendment supporters, such as Brooks, have largely blamed a mental health crisis and poor moral values in the nation, pushing back against proposals for stricter gun laws.

In an interview with Fox News Sunday hosted by Smith, Brooks again promoted this perspective, as the journalist cited polling data and questioned him over any possible reforms he would support.

“The minimum age in your state to buy an AR-15, like the one the school shooter used in Uvalde, is 18 years old. There’s no waiting period between the time a firearm is purchased and when its turned over to the buyer. There’s no license for the sale of ammunition. Gallup does find that a majority of Americans, 52 percent of them, are in favor of stricter gun laws when it comes to the sale of firearms,” Smith told the lawmaker.

“So, to the majority of Americans who feel that way, you say what?” the Fox News host then asked.

The Alabama Republican responded by saying he doesn’t believe the polling data accurately reflects Americans’ opinions. “I suspect that the people who were polled, by way of example, were not properly explained what the purpose of the Second Amendment right to bear arms is,” he said.