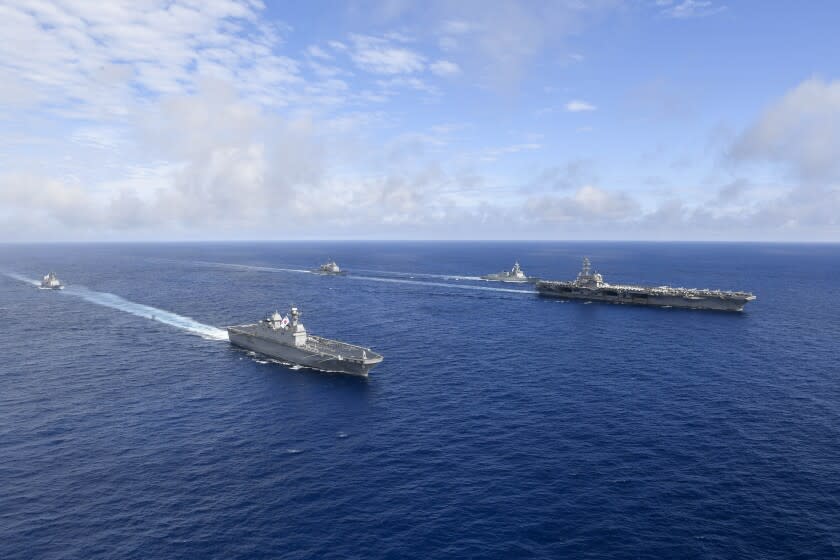 The U.S. aircraft carrier Ronald Reagan concluded a naval exercise with South Korea in the Philippine Sea on Saturday, the two militaries said, amid signs that North Korea is possibly preparing to conduct its first nuclear test explosion since 2017.

The three-day exercise that began Thursday in international waters off the Japanese island of Okinawa was apparently the allies’ first joint drill involving a U.S. aircraft carrier since November 2017.

At that time, the Ronald Reagan joined the USS Theodore Roosevelt and Nimitz in a rare three-carrier exercise with South Korean naval vessels during North Korea’s last provocative run of nuclear and intercontinental ballistic missile tests.

The latest drill came weeks after President Biden and South Korean President Yoon Suk-yeol in a summit in Seoul vowed to upgrade defense exercises and discuss ways for Washington to protect its ally in the face of growing North Korean threats.

The U.S. Navy’s 7th Fleet said that the exercise was aimed at strengthening the interoperability of the two navies.

On Friday, Biden’s special envoy for North Korea, Sung Kim, said Washington was “preparing for all contingencies” in close coordination with South Korea and Japan as it monitors North Korean preparations for a possible nuclear test that could be imminent.

Kim, who was in Seoul for a trilateral meeting with his South Korean and Japanese counterparts to discuss the nuclear standoff with North Korea, said Washington assesses that the North is pressing ahead with preparations at its nuclear testing ground in the northeastern town of Punggye-ri.

The North’s next test would be its seventh since 2006 and the first since September 2017, when it claimed to have detonated a thermonuclear bomb to fit on…