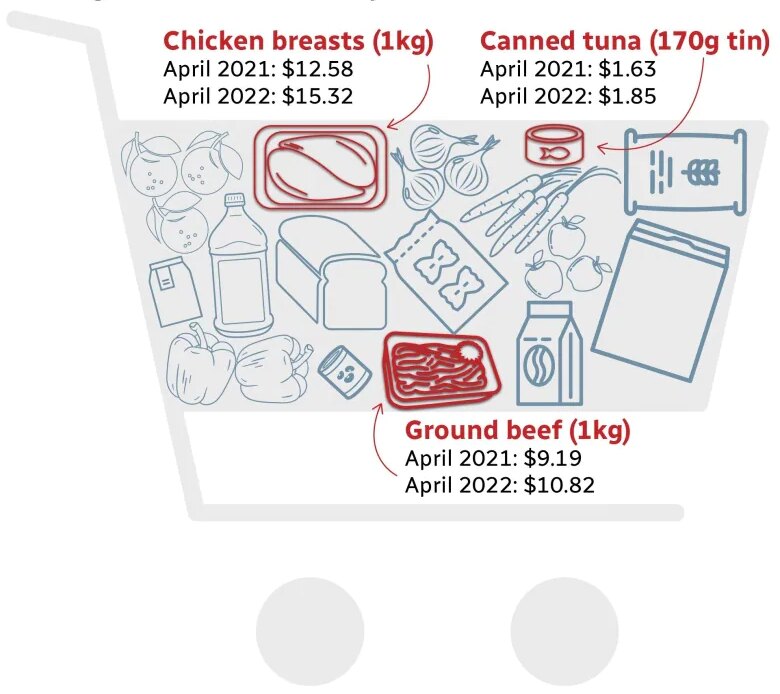 It’s been happening for months. You get to the bottom of your grocery cart at the check-out, go to pay and then feel the sting of yet another higher-than-usual total.

Food prices rose 9.7 per cent in May compared to the previous year, matching the rise in April. Just about everything is up from meat to fruits and vegetables to pantry staples like flour and cooking oil — which rose 30 per cent.

Earlier this month, Food Banks Canada released data that suggests nearly one in four Canadians (23 per cent) are “eating less than they believe they should” because of inflation.

So what exactly is driving up your food bill? CBC News put together a sample cart of 16 common items to illustrate it — and the price of that’s gone up $16.25 in the past year.

Here’s how it’s adding up:

If you’re thinking of using dairy products to supplement your protein intake, there’s bad news on that front. The Canadian Dairy Commission this week approved another 2.5 per cent price hike, which will drive up the price of milk and items made from milk products, like cheese and yogurt.

On average, fresh fruit cost 10 per cent more in April than one year ago, while fresh vegetables were up by 8.2 per cent for the same period.

The price of frozen vegetables remained relatively stable, and even dipped slightly in some cases.

Not only did Food Bank Canada’s survey, conducted by Mainstreet Research, find that 23 per cent of respondents say they were eating less due to soaring food costs, but nearly that many (19 per cent) also said they found themselves hungry but unable to eat because there wasn’t enough money for food.

“Food is often the first thing that people will cut back on,” Rachael Wilson, CEO of Ottawa Food Bank, told CBC’s Heather Hiscox. “We constantly hear about parents who are going without to ensure that their families and children have food to eat.”

In March 2021 alone, there were over 1.3 million visits to food banks across Canada — an increase of approximately 20 per cent compared to 2019. And that was well before inflation hit.

“We’re seeing more repeat visitors,” Wilson said. “This is not once a month. This is people who need food regularly throughout the month because they just cannot afford to feed their families. We’ve never seen anything like this in the history of the Ottawa Food Bank.”

One of the major drivers of your basic…