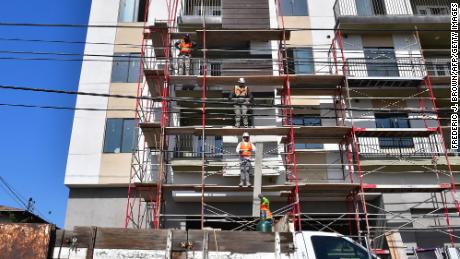 Although quickly rising mortgage rates are already appearing to cool overheated housing markets, they are putting the homeownership dreams of millions of Americans even further out of reach, researchers and housing industry experts said.

The income needed to qualify for a home has skyrocketed: The mortgage, property tax and insurance payments for a median-priced home of $340,700 cost $700 more per month in April 2022 than they did a year before. And the annual income needed to qualify for such a home is $28,000 higher in April 2022 versus last year, according to Harvard’s Joint Center for Housing Studies, which analyzed data from Freddie Mac and the National Association of Realtors.

This has priced out about 4 million renters over the past year alone, said Daniel T. McCue, senior research associate at the Joint Center for Housing Studies.

“If the door is closing on affordable home ownership, it would lock in some significant inequities in housing,” he said Wednesday during a webcast panel discussion about the report.

A tale of two housing markets

Economic gains made before the pandemic; financial stimulus benefits and moratoriums on foreclosures and evictions during the pandemic; and a strong job market; helped to not only keep people in their homes but also allowed other Americans — especially older Millennials and people of color — to have the financial wherewithal to become homeowners.

But in March 2022, home prices rose 20.6% year-over-year — which was the largest jump in 30 years of record-keeping, according to Joint Center for Housing Studies tabulations of CoStar and CoreLogic Case-Shiller Home Price Indices data. Rents shot up as well, especially for single-family homes that served as remote office spaces for families during the pandemic.

That caught the eye of investment firms, which snapped up moderately priced homes in booming markets to then rent out or flip for a profit. Investor holdings accounted for nearly 30% of all homes sold during the first quarter of this year, Harvard’s housing studies researchers noted, citing CoreLogic data.

New construction increased as well, but the majority of those new homes sold for more than $400,000, putting them out of reach for first-time home buyers, the researchers said.

The growth in homeownership, however, has not been enough to narrow the gap of longstanding, systemic racial disparities. In early 2022, homeownership rates for Black and Hispanic households were 45.3% and 49.1%, respectively. By…