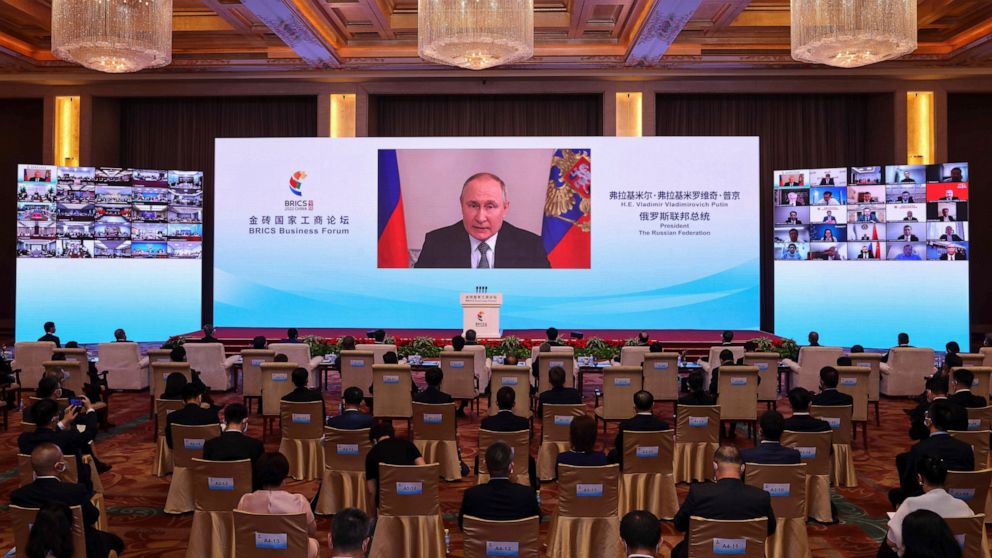 BEIJING — Chinese President Xi Jinping opened a meeting of leaders of major developing countries on Thursday by saying the world should oppose unilateral sanctions and efforts by some countries to maintain their political and military power.

Xi’s remarks at the virtual meeting of the leaders of Brazil, Russia, India, China and South Africa, known collectively as “BRICS,” reflect China’s tacit backing of Russia in the war in Ukraine and its desire to form an international alliance opposed to the U.S.-led liberal democratic order.

The BRICS meeting comes amid rising concerns over the global economic outlook and a growing political divide between China and India.

Nations need to “reject the Cold War mentality and bloc confrontation, oppose unilateral sanctions and abuse of sanctions, and reject the small circles built around hegemonism by forming one big family belonging to a community with a shared future for humanity,” Xi was quoted as saying by the official Xinhua News Agency.

While no agenda has been issued for the two-day talks, Ukraine is likely to feature heavily in the background. China has refused to condemn Russia’s invasion while criticizing sanctions brought against Moscow. India has bought large amounts of Russian oil at a heavy discount, and South Africa abstained in a United Nations vote condemning Russia’s actions.

China has sought to use the BRICS meetings to further its vision of an alliance to counter the U.S.-led liberal democratic world order while expanding its economic and political footprint.

That has produced few tangible results, but Xi remains committed to the idea of an alternative — and principally authoritarian — mode of global governance, investing heavily in countries such as Cambodia while cracking down on civil rights in Hong Kong and boosting its military to assert its territorial claims in the South China Sea and threats to annex Taiwan by force.

In an address to the BRICS Economic Summit on Wednesday, Xi said the conflict in Ukraine has “sounded an alarm for humanity,” continuing its formal position of neutrality while backing its ally Russia.

Xi said imposing sanctions could act as a “boomerang” and a “double-edged sword,” and that the global community would suffer from “politicizing, mechanizing and…