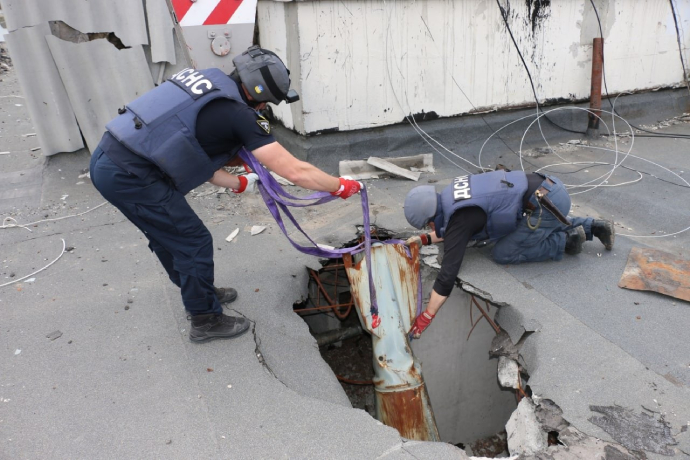 Sappers have neutralised an FAB-500 bomb, which was on the roof of a 9-storey residential building in Pivnichna Saltivka, Kharkiv.

Details: It is stated that the State Emergency Service bomb disposal team carried out a very risky operation to neutralise the FAB-500 bomb.

Back in March, a Russian plane dropped a bomb on Kharkiv, hitting the roof of a residential high-rise in Pivnichna Saltivka and getting stuck on its technical floor.

An FAB-500 is a heavy-duty, unguided, high-explosive bomb carrying 300 kg of explosives. It could have destroyed the whole building, but fortunately it didn’t work.

At the time in March, State Emergency Service bomb disposal experts deactivated the bomb by unscrewing a contact detonator. However, it was impossible to use heavy equipment to retrieve and neutralise it completely – constant shelling had continued.

Now a special rescue vehicle, a forklift, a bomb disposal team vehicle, a heavy mobile crane and about ten sappers and rescuers have been involved in the operation.

The bomb has been removed for further disposal.