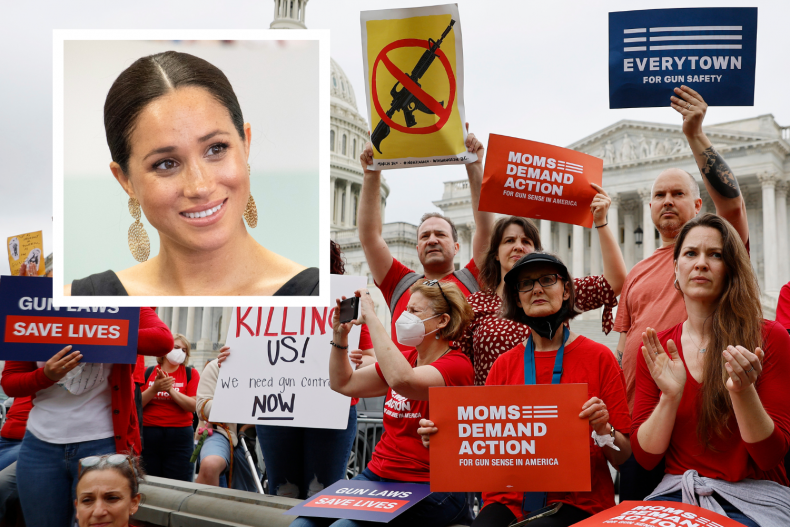 Meghan Markle has lent her support to a mom-led gun control movement following a private visit to the Texas town of Uvalde in the wake of a deadly school shooting in May.

The Duchess of Sussex sent a letter of support, dated June 22, to members of the Moms Demand Action movement, which was founded by activist Shannon Watts following the Sandy Hook school shooting in 2012.

In the letter, sent in a personal capacity, Meghan offered “a huge thank you for the work you are doing to keep our kids, families, and communities safe.”

The letter, showing the royal’s support for enforcing stricter controls on gun ownership in the United States, comes after it was announced via a spokesperson that Meghan made a private visit to Uvalde, Texas following the shooting at Robb Elementary school in her “personal capacity as a mother.”

The shooting saw 19 children and two educators fatally shot by 18-year-old gunman Salvador Ramos and Meghan traveled to the town to offer her support in person to “a community experiencing unimaginable grief.”

At the time of her visit, Meghan was accused of staging a PR stunt after photographs of her paying respects at a memorial to the victims were published.

Meghan’s letter to Moms Demand Action was shared on social media by Shannon Watts, who after the Uvalde shooting released a statement reading: “We’re devastated by this horrific act of gun violence that will forever traumatize the Uvalde community.

“School shootings are not acts of nature, they’re man-made acts of inaction, of cowardice, of corruption by all lawmakers who refuse to pass laws proven by data to stop preventable, senseless shootings like in Uvalde. We cannot and will not accept a reality in which our children aren’t safe in schools or their communities.”

In the opening of her letter, Meghan referred to Watts as a “fearless leader” and added: “Please know that while you may feel exhausted by your endless hours of dedication to this cause, I hope you feel energized in knowing that the work you’re doing is vital and so deeply appreciated.”

The duchess then signed off with the line: “As a mom, as a friend, thank you so much!”

Watts posted the letter, to Twitter with the caption: “.@MomsDemand volunteers and staff have been…