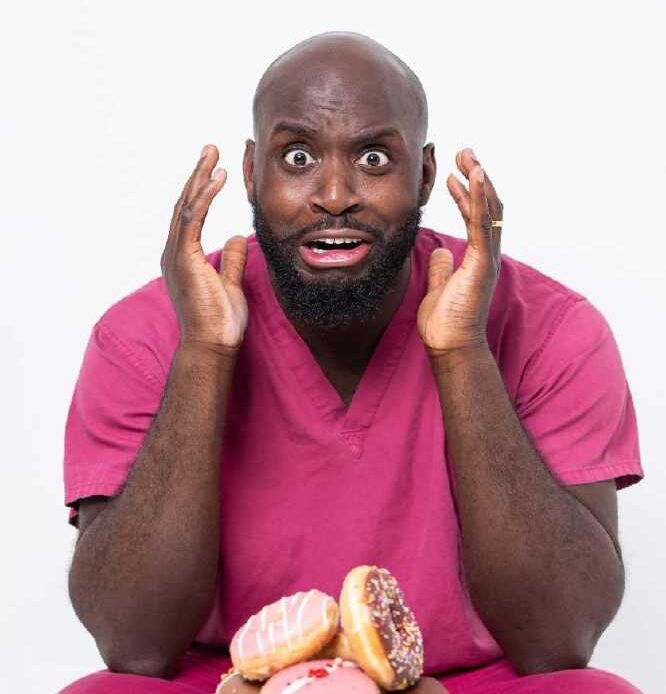 Doctors are seen as the bastions of health; yet paradoxically with its mentally exhausting long hours it’s a profession that I know first-hand, challenges one’s psychological wellbeing.

Without ‘Sanity Strategies’ (your workplace wellbeing lead will nick this one), activities that allow one to mentally recuperate, many would struggle to sustain themselves in this rewarding vocation (of which rewards are largely unsolicited applause). For the last 5 years, one of my strategies has been stand up comedy.

I’d be a liar if I said I intentionally looked for solace in an environment where heckling, verbal and physical abuse are occupational hazards, as US comic juggernauts Chris Rock & Dave Chapelle were recently reminded. I was terrified before my first gig, even got chucked off after 3 and half minutes by the audience (it was a gong show to be fair) but I’ve been hooked by comedic curiosity ever since. Trepidation’s been replaced by joy and laughter.

Getting a whole room to erupt with laughter is a feeling like no other. I don’t take recreational drugs nor do I advocate their use but the feeling must be akin to a ‘hit’. That dopamine hit, that surge of Adrenaline and whether I’m on stage for 10, 20 or even 60 minutes (hello, debut hour in Edinburgh this August!), I’m just chasing that ‘hit’ over and over. I call it a ‘legal high’.

The work needed to get these ‘highs’ can give one a buzz too. Writing new material, trying it out for the first time at a show, workshopping it based on audience reactions, undergoing trial and error until the joke is complete is one of the most satisfying aspects of the artform for me. Comedy allows me to explore my creative side which had been supressed prior. Medical School didn’t leave time for much else! Furthermore, working as a doctor, creativity is seldom encouraged, when it comes to CPR – You’ve got to stick to the script. It’s not the time find out whether laughter is really the best medicine.

If not the best, laughter is good medicine for the soul. Comedy is now therapeutic for me. It’s become my release, my form of escapism from the world of Medicine; in some ways, it’s my prescription to myself.

Of course, not every treatment regime goes to plan and I’ve had some bad gigs, a couple stinkers but fortunately they are few and far between. However, I always remind myself that whilst “dying on stage” is not pleasant, it…