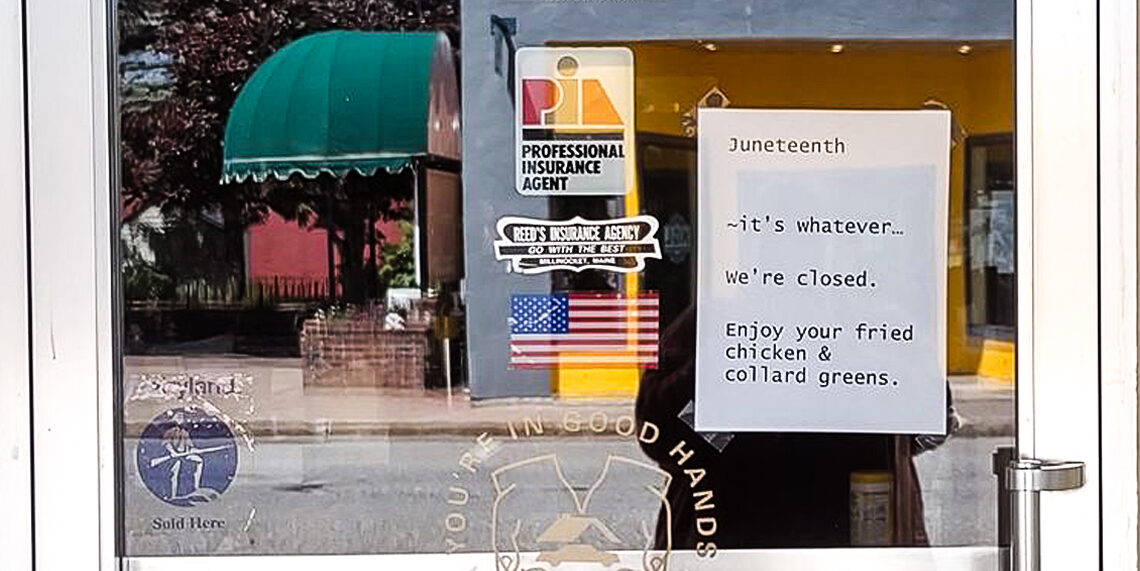 A racist sign about Juneteenth hung on the front door of an insurance company in Millinocket, Maine, has prompted viral internet outrage, condemnation from town leaders and an apology from someone affiliated with the business.

The note was an explanation as to why the business was closed for Juneteenth, the nation’s newest federal holiday that has long been celebrated by Black Americans to commemorate the first emancipation of enslaved people in Texas in 1865.

Lisa Groelly, who photographed the sign, said she was at work when a co-worker called her and told her about it. Her initial reaction was “disbelief,” she said, so she went to the agency to see it for herself.

“It was shocking,” she said. “I came back and I was talking to my co-worker about it, and we were really shocked. We were amazed at the sheer ignorance and stupidity of it.”

Groelly sent the photos to her daughter, Alura Stillwagon, who posted them to Facebook on Monday with the caption, “The racism in Millinocket is real.” Another photo of the sign blew up on the social media website Reddit, with more than 2,000 upvotes.

A woman named Melanie Higgins took responsibility for the sign in a letter posted to Facebook on Wednesday. She apologized for “any misunderstanding and hurt” caused by her “usual, snarky office closure signs and content.” Higgins, who said in the letter she is multiracial, said she understands the “severity of intolerance” and that the sign had a “seemingly flippant tone.”

“I am so sorry for any pain I have caused and the negative attention it has brought to our beautiful community,” Higgins wrote.

Amid widespread criticism of the sign, Allstate insurance ended its relationship with the company for violating its code of conduct, a spokesperson confirmed to NBC News. Progressive insurance also terminated its relationship with the agency in recent days for violating its code of conduct, CNBC reported. A Progressive spokesperson said in a statement to CNBC that the company was “aware and appalled by the sign.”

The outrage was so harsh that it prompted a different insurance agency in Maine with a similar name to issue a statement underscoring its lack of involvement with the incident.

In a statement Tuesday, the chair of the Millinocket Town Council, Steve Golieb,…