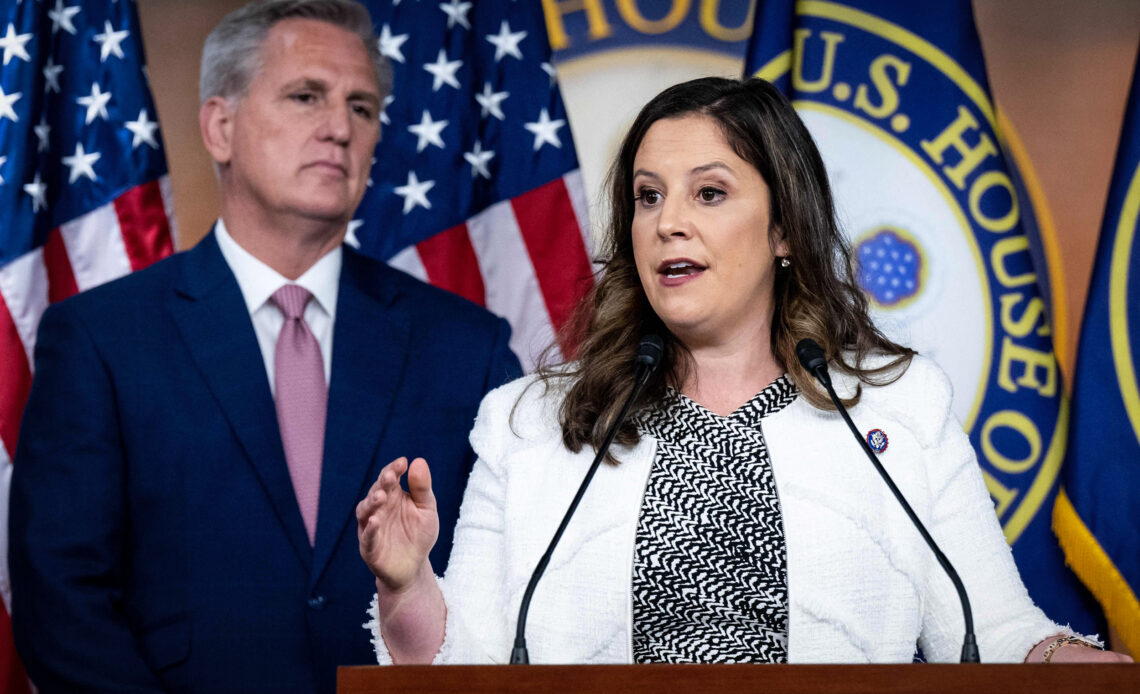 Elise Stefanik of New York, the No. 3 Republican in the House, rankled fellow House GOP leaders when she backed a New York congressional candidate with a history of racist and other controversial remarks, two sources said.

Stefanik endorsed Carl Paladino, a Buffalo developer, this month without consulting other members of a leadership team that includes Minority Leader Kevin McCarthy of California and Minority Whip Steve Scalise of Louisiana, said a House GOP leadership aide who spoke on condition of anonymity because they were not authorized to comment publicly about the matter.

A House Republican familiar with GOP leadership’s frustration with Stefanik, who also spoke on condition of anonymity, called her endorsement of Paladino “baffling” and “off-putting.”

Paladino made headlines in recent weeks for suggesting on Facebook that recent mass shootings were “false flag” operations and for an interview last year in which he said Adolf Hitler was the “kind of leader we need today,” with news articles pointing out his connection to Stefanik, the chair of the House Republican Conference. The sources said the appearance of a connection between Paladino and House leadership frustrated fellow top Republicans.

“When you’re in that No. 3 position, when you’re in leadership, anything you say is something that’s going to be interpreted as on behalf of the team,” the House leadership aide said, adding: “This is the reason we got rid of Liz Cheney. And now Elise is doing the same thing.”

Republicans ousted Rep. Liz Cheney of Wyoming from leadership and replaced her with Stefanik last year after Cheney, who voted to impeach then-President Donald Trump for his role in the Capitol riot, continued to publicly rebuke him for promoting false claims about the 2020 election.

Stefanik’s campaign and office declined to comment. Representatives for McCarthy, Scalise and the National Republican Congressional Committee did not respond to requests for comment.

A senior Republican who was not authorized to speak about the subject pointed to Stefanik’s endorsement record this cycle, noting that “a majority of her endorsed candidates are winning” and predicting that Nick Langworthy, the state GOP chair who is also seeking to represent the 23rd District, will suffer “a huge, embarrassing loss” to Paladino in the Aug. 23 primary.

“Republicans running for leadership would be very smart to make Carl an ally, as he will be a member come January 2023,” this person…