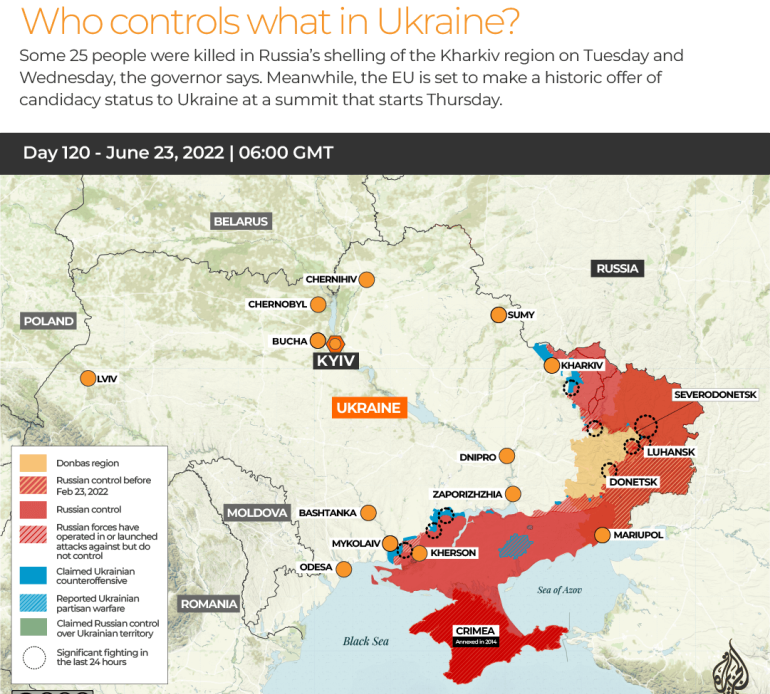 Here, Al Jazeera looks at the major events that marked the 17th week of the war in Ukraine:

Russian mercenaries from the Wagner Group reportedly threaten to cut off the Severdonetsk ground lines of supply when they take over the settlement of Vrubivke, throwing Ukrainian defences back to Vasylivka, Yakovlivka and Berestove – settlements within 10km (6.2 miles) of the critical Bakhmut-Lysychansk highway.

Satellite imagery appears to show Russia is bolstering defences on Snake Island in the Black Sea, a position it uses to enforce the naval blockade against Ukraine.

Ukraine’s general staff says it destroyed the Russian tug boat Vasily Beh as it was ferrying ammunition to the island.

After a two-day meeting with the Contact Group on Defence of Ukraine and NATO in Brussels, Ukraine’s Defence Minister Oleksiy Reznikov stresses that his country needs weapons deliveries in order to reach pre-invasion borders.

Russia cuts gas deliveries to Europe through the Nordstream 1 pipeline to 40 percent of capacity, which will likely result in a cumulative drop of 16 billion cubic metres by the end of the year.

A day earlier, Russia had cut delivery to 60 percent of capacity after Siemens bowed to Canadian sanctions and said it would be unable to deliver overhauled equipment to gas giant Gazprom. Russia has also told Italy’s ENI it will reduce gas deliveries through a different pipeline by 15 percent. It has shut off gas deliveries altogether to Poland, Bulgaria, Denmark, Finland, France and the Netherlands. Germany and Italy are two of Europe’s biggest importers of Russian gas. The latest cuts also affect Austria, Slovakia and the Czech Republic.