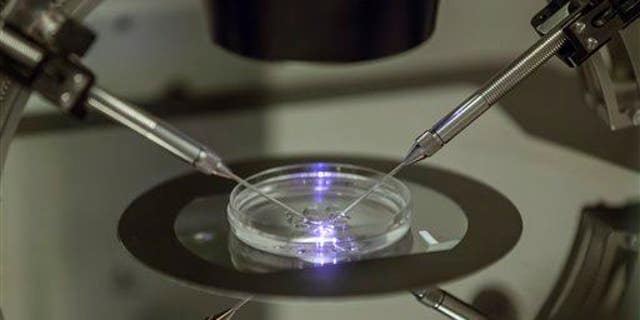 A U.K. High Court judge ruled in favor of a man requesting to use his late wife’s frozen embryo with a surrogate on Wednesday.

Ted Jennings, 38, had submitted his application to the High Court after his wife, Fern-Marie Choya, died suddenly in 2019 while pregnant with twins and did not give written consent as to how her embryos could be used following her untimely death.

The couple had previously engaged in fertility treatments, according to The Guardian. Choya later became pregnant with twins and died suddenly 18 weeks into her pregnancy after experiencing complications.

Jennings and Choya had consented to use her embryos if she were to pass, The Guardian reported. However, her forms stated she should seek additional information if she intended on using the eggs or embryos in someone else’s treatment if she to were to die.

Jennings made a request to the Human Fertilisation and Embryology Authority (HFEA) to use his late wife’s embryos with a surrogate, after which, HFEA rejected the ask due to Choya not having given written consent for posthumous surrogacy.

In this photo taken Aug. 14, 2013, an embryologist works on a petri dish at a fertility clinic in south London.
(AP Photo/Sang Tan)

Family division judge Mrs. Justice Theis ultimately sided with Jennings, saying she was “satisfied” with the court inferring Choya had consented to the use of their embryo with a surrogate if she were to pass. The judge also stated Choya was not given the proper opportunity to give consent when undergoing the IVF process as the form was “far from clear” on how she could give consent, according to BBC.

The judge proceeded to recommend HFEA “consider” reviewing the form in light of her ruling.

“I am delighted that the court has found in Ted’s favour and that he can now proceed with surrogacy treatment. It was clear that this is what Fern would have wanted and this very thorough judgment allows her wishes to be respected,” said Jenning’s lawyer, James Lawford Davies, in The Guardian.

The HFEA issued a statement following the court decision, saying, “This is a tragic case and the HFEA continues to have every sympathy for Mr. Jennings. The act of parliament which governs fertility and embryology in the U.K. is clear that signed…