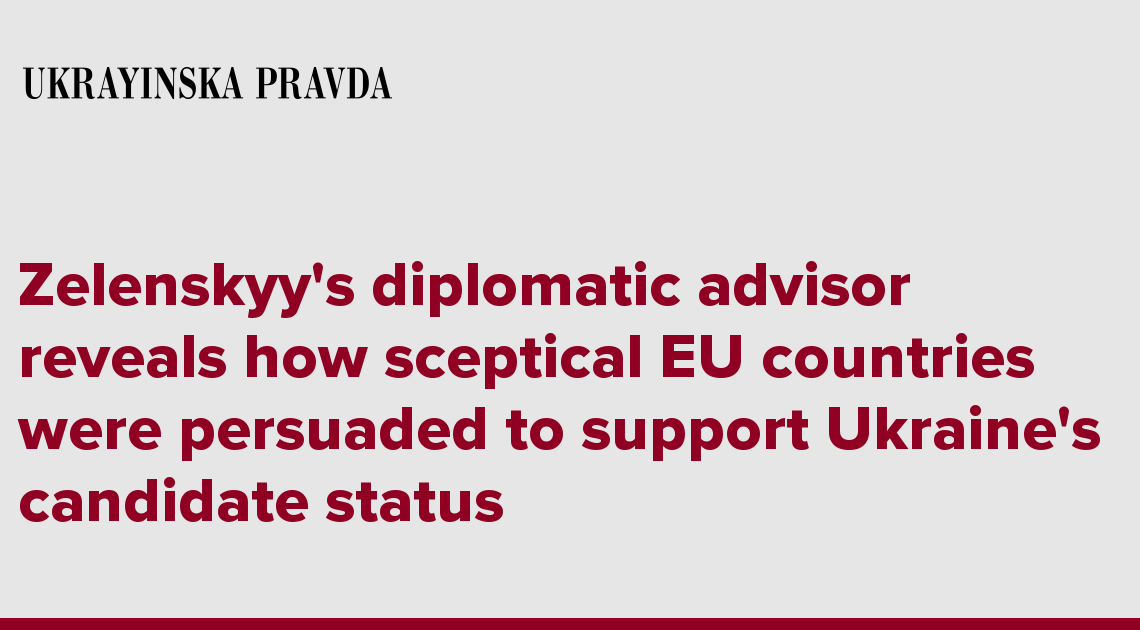 Ihor Zhovkva, deputy head of the President’s Office, has revealed what made sceptical countries such as Denmark and Sweden change their minds and support Ukraine’s bid for candidate status for EU membership.

He talked about this in an interview with the news and analysis website NV, European Pravda reported.

According to Zhovkva, a key role was played by “the work of Ukrainian President Volodymyr Zelenskyy and all the representatives the president appointed to be responsible for these and other countries”, as well as the visits made to these countries by representatives of the government and the Office of the President.

“The main thing is that they saw the actual situation there. The comments made by the countries you named were about, for example, reforms to the anti-corruption policy and reforms in the judicial system. They received enough material to show where Ukraine is at this stage. They saw that Ukraine is able to implement the recommendations set out in the European Commission opinions,” Zhovkva said.

He added that the speeches Zelenskyy made to the parliaments of these countries and the presence of Ukrainian citizens in these states were also an important factor.

“I personally saw many Ukrainian flags in Copenhagen, Madrid and Lisbon on every public building and in the windows of buildings, and many Ukrainians on the streets. The representatives of these countries have seen that Ukrainians are like them. They are hard-working, they have the appropriate education, experience and knowledge, they want to work, they are learning the language. Naturally they are ready to return to Ukraine after the war is over, but at the moment they are already integrated into European societies: Danish, Swedish, Spanish, Dutch – in all of the 27 countries,” Zhovkva added.

A two-day summit of EU leaders begins in Brussels on Thursday, at which the heads of EU states and governments are expected to grant Ukraine candidate status for membership.

The EU says formal talks with the candidates will begin once they have met the conditions set out in the European Commission’s opinions on their membership applications.

Olha Stefanyshyna, deputy prime minister for European and Euro-Atlantic integration, has said that Ukraine expects to have implemented the European Commission’s recommendations on EU candidate status by the end of the year.