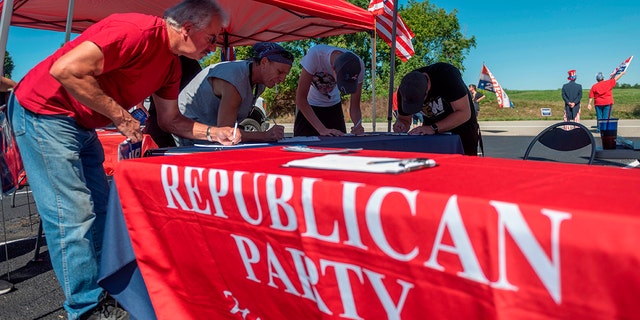 WinRed is marking the third anniversary since its founding by announcing it has raised nearly $3 billion dollars for more than 5,000 Republican campaigns as it plans to continue making big impacts in the 2022 midterm elections.

With exclusive data provided to Fox News Digital, the GOP fundraising platform touted its outperformance of ActBlue, its Democratic rival, and outlined the success it saw in various areas as a fundraising body.

“We have exceeded expectations, but have a lot more to do,” said Gerrit Lansing, president of WinRed, in a statement provided to Fox News Digital. “WinRed looks forward to helping retake majorities all across America in November and continuing to keep the pedal down on expanding our products and services.”

WinRed describes itself as the “premiere online fundraising technology platform utilized by Republicans,” and was founded in 2019 with the purpose of combating Democrats’ then-advantage in online fundraising, driven by ActBlue.

People register to vote during a Republican voter registration in Brownsville, Pennsylvania on September 5, 2020.
(ANDREW CABALLERO-REYNOLDS/AFP via Getty Images)

According to WinRed, it processed its first $2 billion within 15 months of its founding, a feat it says took ActBlue 15 years to achieve. The group also said it raised Republicans 44% more funds because of its “unique” features, such as donor-specific accounts, allowing candidates to fundraise together, and its website’s candidate directory.

In the data provided to Fox News Digital, WinRed touted its processing of $116.9 million in funds for campaign merchandise, such as yard signs and t-shirts, and said more than 2,300 state and local campaigns had raised $142.6 million through its platform.

HOW REPUBLICANS’ WINRED FUNDRAISING PLATFORM IS GEARING UP FOR THE MIDTERMS

In addition, it said it had saved its campaigns “millions of dollars” so far this election year by offering lower processing fees than ActBlue.

Republican Elephant graphic, the symbol of the…