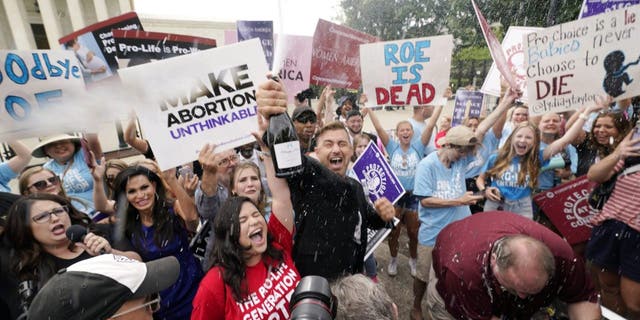 As the Supreme Court overturned Roe v Wade, Chief Justice John Roberts agreed with the majority in upholding a Mississippi law restricting abortion, but wanted to stop short of overturning Roe itself.

The high court ruled 6-3 in Dobbs v. Jackson Women’s Health Organization, to uphold a Mississippi law that banned abortion after 15 weeks of pregnancy. The Republican-led state of Mississippi asked the Supreme Court to strike down a lower court ruling that stopped the 15-week abortion ban from taking place.

However, while concurring with the majority in overturning the Mississippi law, Roberts was critical of his colleagues in taking the additional step of overturning both Roe and the 1992 Casey v Planned Parenthood decision.

Pro-life advocates celebrate, Friday, June 24, 2022, outside the Supreme Court in Washington. The Supreme Court has ended constitutional protections for abortion that had been in place nearly 50 years, a decision by its conservative majority to overturn the court’s landmark abortion cases.
(AP Photo/Steve Helber)

“We end this opinion where we began. Abortion presents a profound moral question. The Constitution does not prohibit the citizens of each State from regulating or prohibiting abortion. Roe and Casey arrogated that authority. We now overrule those decisions and return that authority to the people and their elected representatives,” Justice Samuel Alito wrote in the court’s opinion.

But Roberts, in his separate concurrence, said he would take “a more measured course.”

He faults Roe and says its “viability” standard — whereby a woman is said to have a right to an abortion until the fetus is deemed to be able to survive outside the uterus — set by Roe should be discarded (“That line never made any sense”) and the right to an abortion “should therefore extend far enough to ensure a reasonable opportunity to choose, but need not extend any further — certainly not all the way to viability.”

Roberts later says that “the viability rule was created outside the ordinary course of litigation, is and always has been completely unreasoned, and fails to take account of state interests since recognized as legitimate.”