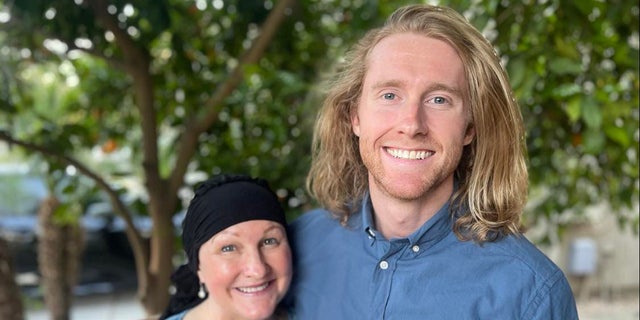 Melanie Shaha’s son, known for having a full head of strawberry blonde locks, embarked on a two-year journey to give her the ultimate gift: a new head of hair.

Matt Shaha, 27, who started his mission in early 2020, grew out his hair 12 inches before chopping it off and paying for a company to hand tie a wig.

It was a gift the mother of six could never have fathomed.

“When you wear a hat everywhere, you just stick out like a sore thumb,” she said. “I don’t mind being sick, but I do very much mind that I look sick.”

Melanie had been battling the tumor on her pituitary gland since 2003. According to the Mayo Clinic, a pituitary tumor forms in the pituitary gland at the base of the brain and can cause changes in someone’s hormone levels.

Although the tumor was benign, “it was in the wrong place and smashes important things, so you can’t let it stay there,” Melanie said.

Melanie Shaha and her family before losing her hair to radiation.
(Stacey Hemeyer Photography)

After her first diagnosis, she underwent neurosurgery. Three years later, the tumor returned, and she had to undergo a second surgery.

In 2017, when the tumor returned for the third time, Melanie said she underwent radiation to keep the tumor from growing, and eventually shrink it.

However, the Arizona mom said there were lasting side effects.

“About three months after radiation, all my hair started to fall out, which I didn’t know would happen,” she said. “And the doctor said it won’t come back.”

Matt told FOX Business that the idea of growing out his hair for his mom was always in the back of his mind.

During one of his school breaks, he recalled turning to his mom and saying, “Maybe I’ll grow it for you mom.”

“Then it just kind of like clicked: Well, why don’t I?” he added.

However, he wasn’t able to begin growing out his hair while attending Brigham Young University because of the school’s dress and grooming standards.

Matt Shaha chops off his hair to make his mom, Melanie, a wig.
(Mercedes Berg Photography)