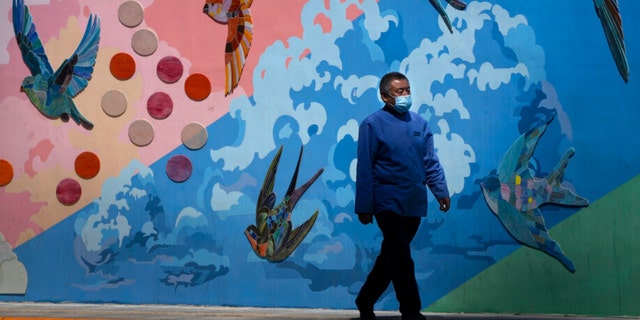 An employee of a Chinese state-owned company is under the microscope after making flamboyant statements about his wealth and personal connections with government officials.

Zhou Jie, the employee now under investigation for corruption, posted a series of messages on social media platform WeChat in which he bragged about rubbing elbows with important government leaders.

Zhou went on to brag that a provincial governor had gifted him a cigarette worth $180 a carton. Zhou went on to claim he had come into possession of luxury watches, gourmet teas and exclusive high fashion garments.

A man wearing a face masks walks past a mural along a street in Beijing, Wednesday, May 25, 2022.
(AP Photo/Mark Schiefelbein)

The gloating prompted an internal corruption probe after Zhou’s repeated references to favors and gifts from Chinese Communist Party leaders.

“The story that a certain provincial government leader gave him a cigarette was false. Zhou made it up to show off,” Capital Operation Holding Group, Zhou’s employer, said Wednesday according to a translation by the South China Morning Post.

A woman views the Chinese social media website Weibo at a café in Beijing on April 2, 2012.
(AFP/File)

Capital Operation Holding Group said Monday that they were made aware of Zhou’s posts and were looking into the matter. The company later explained that the employee’s claims were made up due to “vanity.”

According to Capital Operation Holding Group, Zhou began employment with the company in March 2020, but the comments alleging hyper-wealth and social power had already begun in June 2019.

Timothy Nerozzi is a writer for Fox News Digital. You can follow him on Twitter @timothynerozzi and can email him at timothy.nerozzi@fox.com