Followers of cleric enter Iraqi parliament in show of force 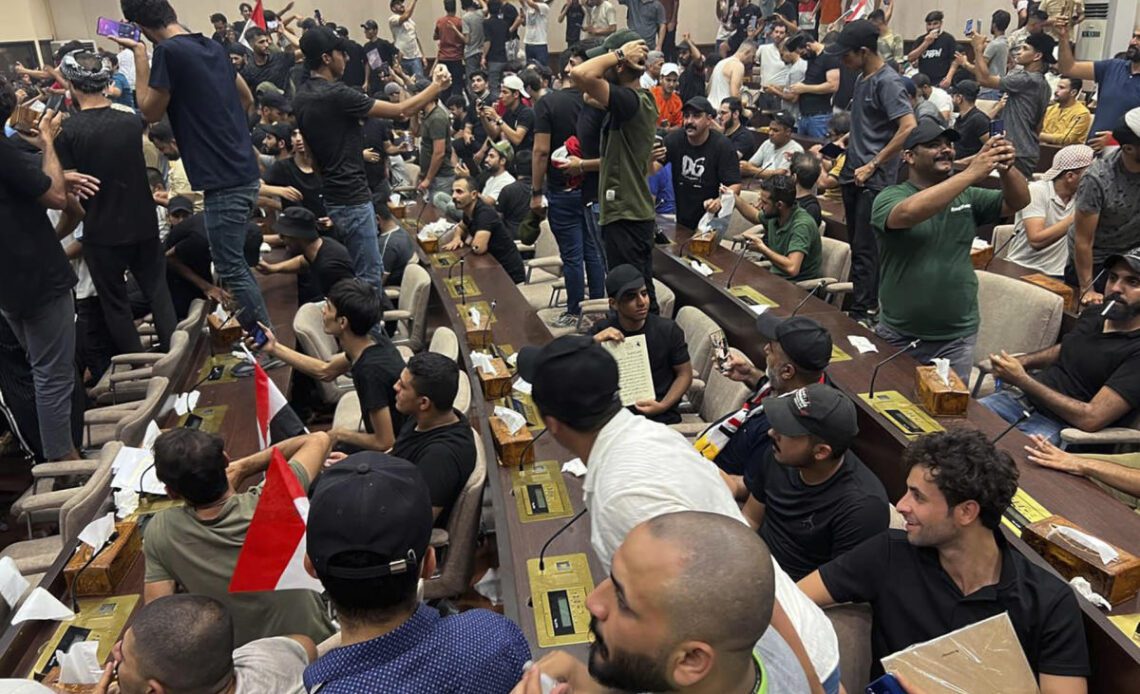 The majority of the protesters were followers of influential Shiite cleric Muqtada al-Sadr. The demonstrators, all of them men, were seen walking on tables of the parliament floor, leafing through folders, sitting in the chairs of lawmakers and waving Iraqi flags. The incident raised the stakes in the political struggle for Iraq nearly 10 months after federal elections.

No lawmakers were present. Only security forces were inside the building and they appeared to allow the protesters in with relative ease.

The demonstrators were protesting the recent selection of Mohammed al-Sudani as the official nominee of the Coordination Framework bloc, a coalition led by Iran-backed Shiite parties and their allies.

It was the largest protest since federal elections were held in October, and the second time al-Sadr has used his ability to mobilize masses to send a message to his political rivals this month. Earlier in July, thousands heeded his call for a mass prayer, an event many feared would devolve into destabilizing protests.

Hours after his followers occupied parliament, al-Sadr issued a statement on Twitter telling them their message had been received, and “to return safely to your homes,” signaling there would be no further escalation to the sit-in. Shortly after, protesters began making their way out of the parliament building with security forces supervising.

The incident, and al-Sadr’s subsequent show of control over his followers, carried an implicit warning to the Framework alliance of a potential escalation to come if the government forms with al-Sudani at the helm.

Al-Sadr’s ability to mobilize and control his large grassroots following gives him powerful leverage over his rivals. In a similar fashion, his followers stormed the Green Zone in 2016 and entered the country’s parliament building to demand political reform.

Earlier in the day, demonstrators breached Baghdad’s heavily fortified Green Zone, which houses the parliament and other government buildings, as well as foreign embassies.

Protesters chanted curses against Iran and said, “Sudani, out!”

Riot police had attempted to repel the protesters using water cannons, but demonstrators scaled the cement barrier walls and pulled down slabs using ropes to enter the Green Zone.