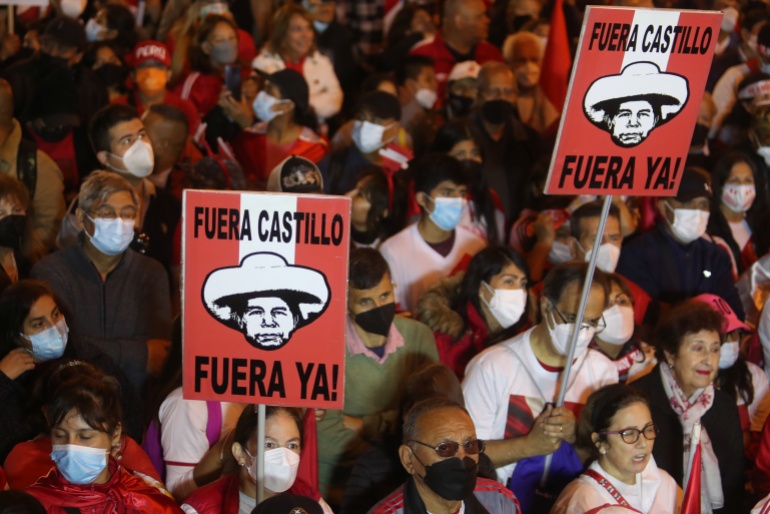 Lima, Peru – A year since his moonshot ascent to Peru’s highest office, socialist President Pedro Castillo is in the throes of political crisis.

One year into his five-year term, Castillo has survived two impeachment attempts, a whiplash-inducing change of cabinet ministers, and deepening economic and political strife.

Last summer, Castillo, a political fledgling and son of illiterate farmers, stormed into Lima from his native Cajamarca in Peru’s northern Andes. An improbable frontman for his Marxist Free Peru party, he promised to rewrite Peru’s constitution, redistribute mineral wealth and resuscitate a nation reeling from the COVID-19 pandemic.

Backed by a coterie of peasant supporters, his message confounded Peru’s left-wing bourgeoisie and shook business and political elites. Rarely seen without his trademark straw hat, Castillo fired up campesino and Indigenous Peruvians with a simple mandate: “No more poor people in a rich country.”

His deeply unpopular far-right challenger, Keiko Fujimori, daughter of Peruvian strongman Alberto Fujimori, admonished voters that Castillo’s economic policies would steer the country into a crisis similar to Venezuela’s. But to many among Peru’s exasperated electorate, which had endured four presidents and two congresses in five years, both candidates represented dangerous extremes. Castillo won by just 44,000 votes in a runoff election last June.

“When he came into office, it’s not at all that he enjoyed the mandate of a majority,” Cynthia McClintock, a political science professor at George Washington University, told Al Jazeera. “He faced a congress in which forces on the right were very opposed to him, and a lot of people voted for him very worried.”

Days after assuming office, Castillo drew fire for naming a number of inexperienced and hardline nominees to his cabinet, some with alleged criminal ties. His fealty to Marxist Free Peru’s party boss, Vladimir Cerron, raised the spectre that he would embrace regional autocrats and enact a radical agenda that would spook foreign investment.