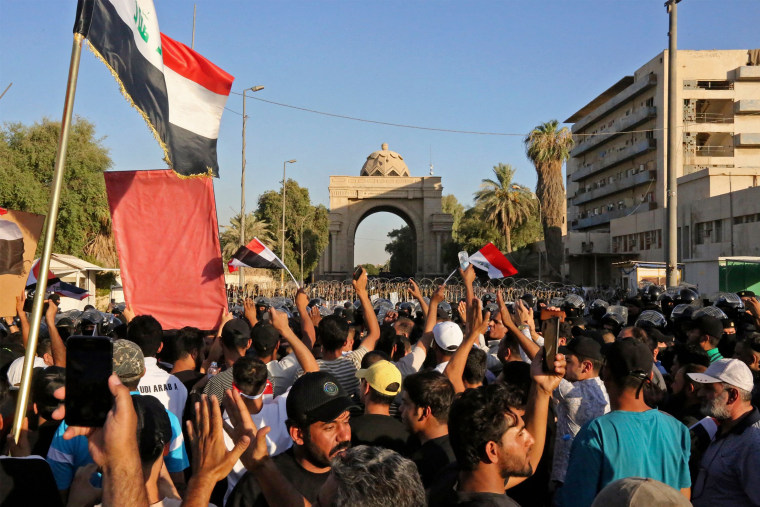 BAGHDAD — Hundreds of Iraqi demonstrators breached Baghdad’s parliament Wednesday, chanting curses against Iran, in a protest against the selection of a nominee for prime minister by Iran-backed parties.

Many protesters were followers of an influential cleric. Some were seen walking on tables and waving Iraqi flags.

No lawmakers were present. Only security forces were inside the building and they appeared to allow the protesters in with relative ease.

The breach came amid the biggest protest since Iraqi elections were held in October. The demonstrators were protesting the recent nomination of Mohammed al-Sudani as the official nominee of the Coordination Framework bloc, a coalition led by Iran-backed Shiite parties and their allies.

Earlier Wednesday, demonstrators, many among them the followers of an influential cleric, breached Baghdad’s heavily fortified Green Zone to protest the selection of a nominee for prime minister by Iran-backed parties.

Riot police used water cannons to repel demonstrators pulling down cement blast walls. But many breached the gates to the area, which houses government buildings and foreign embassies.

The demonstrators walked down the zone’s main thoroughfare, with dozens gathering outside the doors to the parliament building.

Riot police assembled at the doors to the main gates. Demonstrators crowded around two entrances to the Green Zone, with some scaling the cement wall and chanting, “Sudani, out!”

Caretaker Prime Minister Mustafa al-Kadhimi called for calm and restraint, and for protesters to “immediately withdraw” from the area.

The demonstrators were largely followers of influential Shiite cleric Muqtada al-Sadr, who recently stepped down from the political process despite having won the most seats in the October federal election. Protesters carried portraits of the cleric.

In a message to the Shiite leaders Wednesday, Al-Sadr said they could not choose a prime minister or a government without involving him and getting his approval.

He later told his followers to go home and “pray peacefully.”

In 2016, al-Sadr supporters stormed the parliament in a similar fashion. They staged a sit-in and issued demands for political reform after then-Prime Minister Haidar al-Abadi sought to replace party-affiliated ministers with technocrats in an anti-corruption…