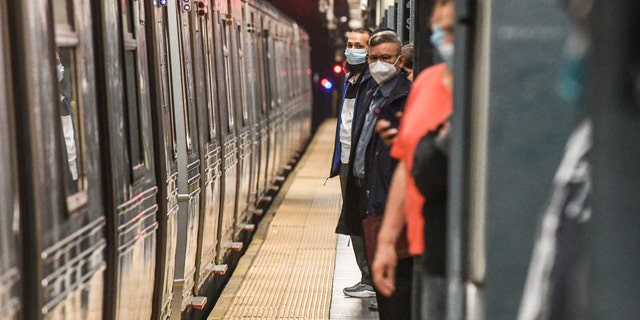 A raunchy pool party erupted on a New York City subway train with bikini-clad women giving commuters lap dances and hurling themselves down a Slip N’ Slide this week in what some call the latest sign that the Big Apple is spinning out of control.

A group of buxom brunettes – along with a little person – were captured on cellphone video turning an L train subway car into a risqué beach-themed burlesque show.

The women can be seen in the footage posted to Twitter twerking on the crotches of male riders, fondling each other in an inflatable kiddie pool and passing out shots of liquor as dozens of straphangers gawk.

“Bare feet and twerking m*****s is not something I wanna see after a long shift,” wrote @MikeFromQueens, who posted the clip July 23rd.

Commuters wait on the platform at the Times Square subway station in New York, US, on Wednesday, May 25, 2022.
(Stephanie Keith/Bloomberg)

It’s unclear when the unauthorized bacchanal occurred, but the subway car was packed, indicating it may have been during rush hour.

“This appears to be a Hollywood concoction or a dopey stunt,” said the agency’s communications director Tim Minton. “Either way, transit workers are not amused by subway messes they have to clean up, and New Yorkers don’t appreciate rides being delayed when trains get taken out of service because selfish grownups came to trend.”

Criminal defense lawyer and former Manhattan prosecutor Mark Bederow said the conduct featured in the footage could actually be a crime. “If the women are grinding their buttocks on the genitals of passengers, who did not consent to such conduct, then the twerkers could be charged with forcible touching or third-degree sex abuse,” he said.

In addition, the crew could be charged with disorderly conduct for blocking straphangers’ ability to walk or move freely about the train, he added.

Former NYPD Police Commissioner Bill Bratton told Fox News Digital that the stunt may seem benign but is a symptom of a blighted city.