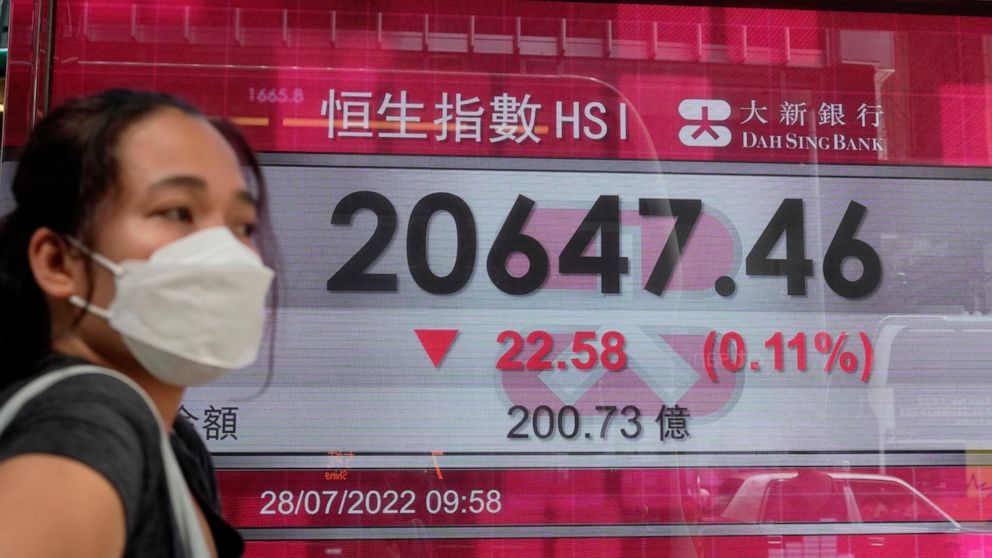 BANGKOK — Shares were mostly higher in Asia on Thursday after the Federal Reserve ratcheted up its campaign against surging inflation by raising its key interest rate three-quarters of a point.

Hong Kong’s benchmark Hang Seng index slipped 0.1% to 20,642.80 after the territory’s Monetary Authority matched the Fed’s 0.75 percentage point rate hike with one of its own. The HKMA aligns its policies with U.S. monetary moves to keep the Hong Kong dollar at a stable rate against the U.S. dollar.

Elsewhere in Asia shares advanced, tracking gains on Wall Street after the Fed did exactly as expected and its chair, Jerome Powell, suggested the Fed’s rate hikes have already had some success in slowing the economy and possibly easing inflationary pressures.

Investors are awaiting an update on U.S. economic growth and a call between U.S. President Joe Biden and Chinese leader Xi Jinping.

“While a concrete decision on tariff relief is not expected from the meeting, any indications of willingness in working toward that is an added positive for markets,” Jun Rong Yeap of IG said in a commentary.

Australia’s S&P/ASX 200 jumped 1% to 6,889.70 after the government reported that retail sales rose in June for the sixth consecutive month. Also, Treasurer Jim Chalmers told Parliament that the government forecasts that inflation will remain unacceptably high for some time to come and the economy will slow but not fall into recession.

Markets in Thailand were closed for a holiday.

On Wall Street investors welcomed the Fed’s widely expected move — which took its key interest rate to its highest level since 2018 — with a broad rally on Wednesday.

Powell’s comments were taken by some as a signal the Fed may not have to raise rates so aggressively in coming months, triggering a rally in the final hour of regular trading.