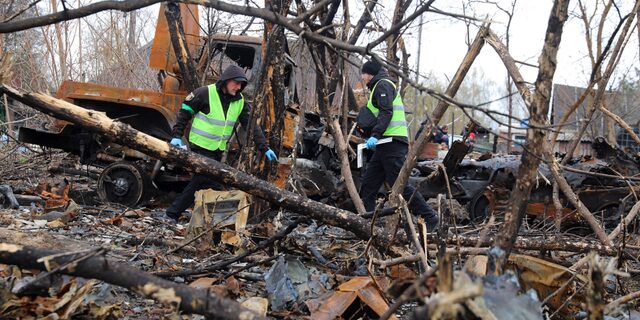 Some two dozen missiles rained down in northern Ukraine Thursday, hitting areas near Kyiv after rockets were fired from Russia, the Black Sea and Belarus.

An official from the Ukrainian air force told Ukrainian news outlet Pravda that its defense system was not able to strike down all of the roughly 20 missiles before they made contact with their targets across the Kyiv region.

At least 15 people have been reported as wounded and an undisclosed number of soldiers in the Ukrainian army were killed after missiles hit a military unit, Deputy Chief of the Main Operational Directorate of the General Staff of the Armed Forces of Ukraine Oleksiy Hromov told Interfax.

Ukrainian police forensic investigators examine an area with burnt Russian military vehicles destroyed during fighting, in the village of Bervytsia, near Brovary, northeast of Kyiv, on Thursday, April 21.
(ALEKSEY FILIPPOV/AFP via Getty Images)

The official did not confirm who was responsible for the missile fire from Belarus but comes as concerns mount over the former Soviet nation ordering troops into Ukraine in support of Russia.

Earlier this month, Belarus ordered military drills to be carried out in the Gomel region, and it began distributing summons to men and women for “mobilization exercises” last month.

The day marks the death of Kyiv’s Prince Volodymyr the Great in 1015, which Zelenskyy said in August 2021 signified the “christening” of Ukraine.

Though the holiday has been celebrated in Russia, Belarus and Ukraine since 2010, Russia renewed its threat on the capital city in a series of strikes Zelenskyy called “missile terror.”