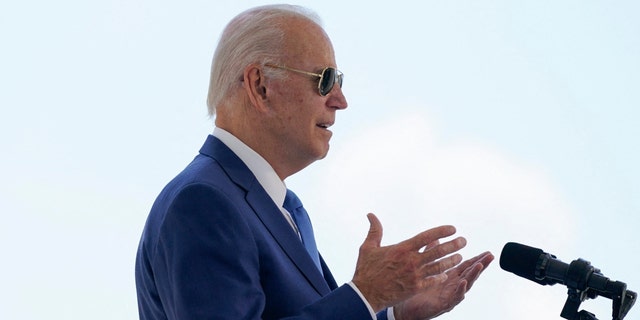 Despite continuing to test positive for COVID-19, President Biden is slated to visit Kentucky next week after deadly flooding ravaged the area.

The White House said in a statement that the president and first lady Jill Biden would travel to the impacted area on Monday to join Gov. Andy Beshear and his wife as they visit families affected by the devastation and “survey recovery efforts at a local Federal Emergency Management Agency (FEMA) State Disaster Recovery Center.

This will be the president’s first trip outside of the nation’s capital since he tested positive for coronavirus in late July.

Biden has been in isolation since July 30, with a rebound case of COVID-19.

KENTUCKY STORMS CAUSE FLOOD WARNING ISSUE TO EXTEND THROUGH SUNDAY

Beshear said in a Friday update that the number of deaths had not been changed, although two people remained missing.

Thousands of residents lost their homes and crews have continued to restore power and water connections to homes.

Debris surrounds Buckhorn school, which was badly damaged during historic flooding, in Buckhorn, Kentucky, on July 31, 2022.
(Photo by Seth Herald/AFP via Getty Images)

The flooding has also impacted parts of Virginia and West Virginia.

A flood watch was in effect and Beshear warned of impending thunderstorms and heat over the coming days.

“There’s a lot of debris that’s out there that could cause clogging in waterways that could lead to flooding,” he cautioned, noting that infrastructure could be impacted.

Julia Musto is a reporter for Fox News Digital. You can find her on Twitter at @JuliaElenaMusto.