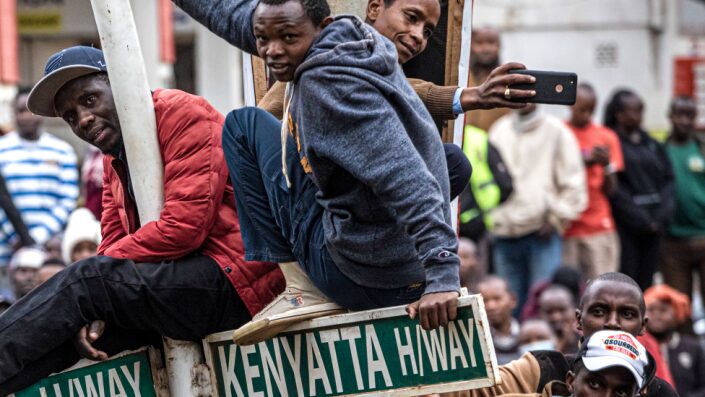 In a move akin to a Trump backing a Clinton in a US election, Kenya’s outgoing President Uhuru Kenyatta wants to hand the political crown to his foe-turned-friend Raila Odinga – only to see his deputy William Ruto trying to snatch it in the 9 August election.

It has led to a political drama that has seen Mr Ruto cast himself as a “hustler”, fighting what he regards as an attempt by two of Kenya’s biggest dynasties – the Kenyattas and Odingas – to hang on to power.

Trying to evoke the sympathy of Kenyans, he has prayed, wept and made the incendiary claim that President Kenyatta was threatening him.

“As long as you don’t kill my children I shall face you but please let’s respect each other,” Mr Ruto said, at one of his final campaign rallies as a crowd cheered him on.

Rebutting his allegation, Mr Kenyatta said: “You have insulted me for close to three years. Has anyone touched you?”

Their exchange showed how personal and bitter Kenya’s election campaign has become, as Mr Kenyatta came out in support of Mr Odinga as his successor.

“The president has diverted the focus of Ruto, to exchange words with him, and to forget about his competitor,” Kenyan political analyst Prof Masibo Lumala told the BBC.

“The president has managed to bring out a side of his deputy that shows his anger, which is not a good thing,” he added.

Another analyst, Prof Macharia Munene said these sharp exchanges made Mr Odinga “look like the sober one” during the campaign, though he also landed some blows on Mr Ruto, questioning his hustler claim by labelling him “a man of lands” – a reference to the long-running controversy over how the deputy president became a big landowner in Kenya. He denies acquiring land illegally.

President Kenyatta’s move to back Mr Odinga has been seen as an attempt by him to secure his legacy by reuniting two families that jointly fought British colonial rule – only to fall out in 1966, three years after independence, and to remain at loggerheads until his second and final term.

It meant ditching Mr Ruto, with whom he formed an alliance in the 2013 election to fight off charges they faced at the International Criminal Court (ICC) over the deadly violence that hit Kenya after the 2007 poll.

“What had united them disappeared,” Prof Munene said, adding: “Now Ruto wants to be elected and Uhuru wants…