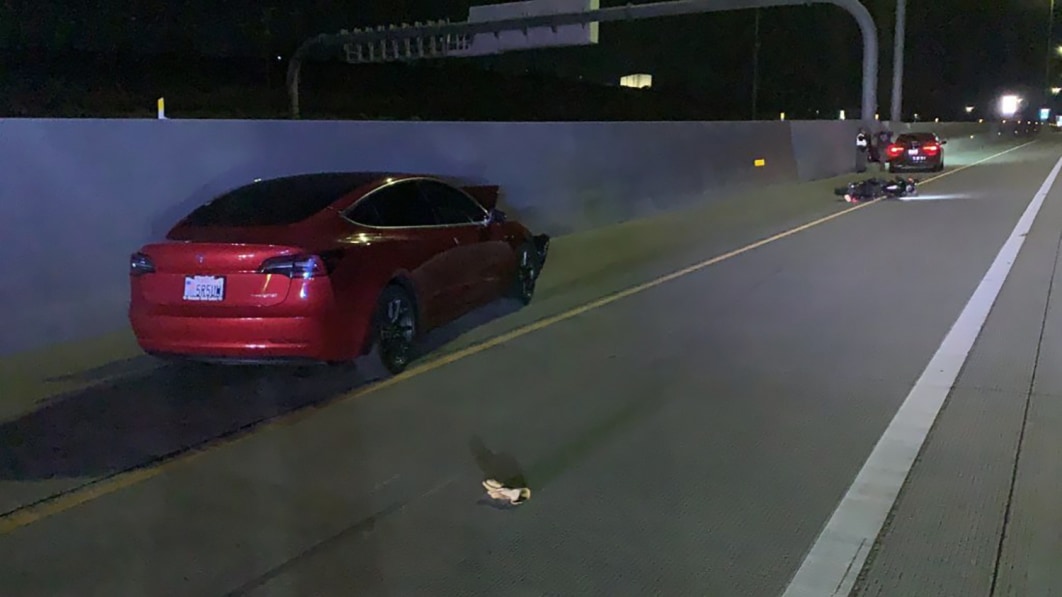 The scene of a fatal accident involving a Tesla and a motorcycle on July 24, 2022 near Draper, Utah. The Tesla driver said he was using Autopilot. (Utah Department of Public Safety via AP)

DETROIT — Two crashes involving Teslas apparently running on Autopilot are drawing scrutiny from federal regulators and point to a potential new hazard on U.S. freeways: The partially automated vehicles may not stop for motorcycles.

The National Highway Traffic Safety Administration sent investigation teams to two crashes last month in which Teslas collided with motorcycles on freeways in the darkness. Both were fatal.

The agency suspects that Tesla’s partially automated driver-assist system was in use in each. The agency says that once it gathers more information, it may include the crashes in a broader probe of Teslas striking emergency vehicles parked along freeways. NHTSA also is investigating over 750 complaints that Teslas can brake for no reason.

The first crash involving a motorcyclist happened at 4:47 a.m. July 7 on State Route 91, a freeway in Riverside, California. A Tesla Model Y SUV was traveling east in the high occupancy vehicle lane. Ahead of it was a rider on a Yamaha V-Star motorcycle, the California Highway Patrol said in a statement.

The vehicles collided, and the unidentified motorcyclist was ejected from the Yamaha. He was pronounced dead at the scene.

Whether the Tesla was operating on Autopilot remains under investigation, a CHP spokesman said.

The second crash happened about 1 a.m. July 24 on Interstate 15 near Draper, Utah. A Tesla Model 3 was behind a Harley-Davidson motorcycle, also in an HOV lane. “The driver of the Tesla did not see the motorcyclist and collided with the back of the motorcycle, which threw the rider from the bike,” the Utah Department of Public Safety said in a statement.

The rider, identified as Landon Embry, 34, of Orem, Utah, died at the scene. The Tesla driver told authorities that he had the vehicle’s Autopilot setting on, the statement said.

Michael Brooks, acting executive director of the nonprofit Center for Auto Safety, called on NHTSA to recall Tesla’s Autopilot because it is not recognizing motorcyclists, emergency vehicles or pedestrians.

“It’s pretty clear to me, and it should be to a lot of Tesla owners by now, this stuff isn’t working properly and it’s not going to live up to the expectations, and it is putting innocent people in danger on…