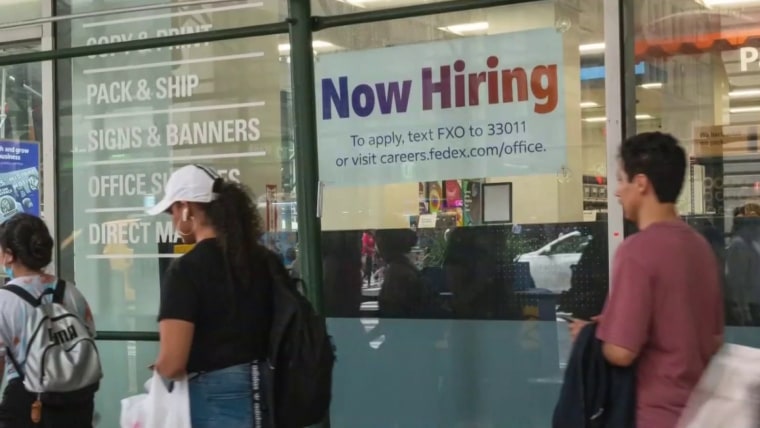 But for many people, something may still feel off about the economy. It could be the 9% rate of inflation. Or the two consecutive quarters of negative gross domestic product data.

Economists like Leer are already raising the prospect of higher unemployment because of the Federal Reserve’s plans to keep raising interest rates. As part of its so-called dual mandate, the nation’s central bank seeks to balance job and price stability — and right now, it believes there is too much demand for labor and not enough stability in consumer prices.

So the Fed is expected to raise its key interest rate for the fifth time this year at its next meeting in September. The idea is to make borrowing more expensive to cool off demand and try to reverse price gains, bringing inflation down to where the central bank wants it to be, around 2%.

As Federal Reserve Chairman Jerome Powell put it at his most recent news conference:

“We think it’s necessary to have growth slow down. … We actually think we need a period of growth below potential. … If we were to be able to get inflation back down on the path to 2% and ultimately get there.”

In an email to clients Friday, Seema Shah, chief global strategist at Principal Global Investors, said the Fed is likely to raise its key rate by another 0.75%.

“Not only is the labor market undoubtedly still tight, but wage growth is uncomfortably strong,” Shah said, suggesting that strong wages, while great for consumers and their families, are what leads to increased spending, higher demand and persistent inflation.

“The Fed has its work cut out for it to create sufficient slack that could ease price pressures,” she said.

Shah added that while all the jobs lost during the pandemic have now been regained, “markets will take [Friday’s] number as a timely reminder that there is significantly more Fed hiking still to come.”

While the Fed’s plan should, eventually, put the economy back in balance, there…