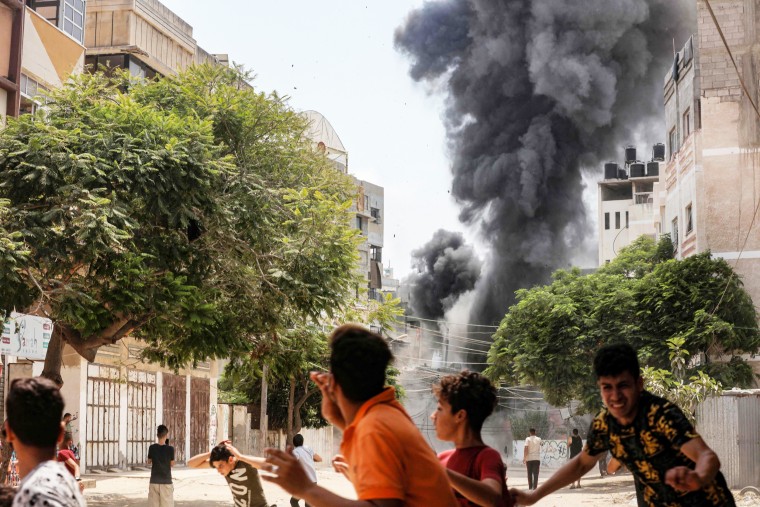 TEL AVIV — Israeli fighter jets pounded targets in Gaza as Palestinian militants launched rocket attacks for the second day in a row on Saturday, bringing more than a year of relative calm along the border to an explosive end.

The Israel Defense Forces, or IDF, said in a statement on Saturday that the airstrikes had killed two operatives from the Palestinian Islamic Jihad group “who were about to fire mortars from the Gaza Strip toward Israeli territory.”

The statement added that the IDF “was continuing to strike terrorist targets in the Gaza Strip,” including a “military training complex and a weapons warehouse.”

In a separate statement, the IDF said that along with other Israeli security forces, it had apprehended 20 suspects on Saturday, 19 of whom it described as “Islamic Jihad terrorist operatives.”

Having earlier claimed responsibility overnight for firing more than 100 rockets at Tel Aviv and other Israeli cities, the Al-Quds Brigades, the armed wing of the Islamic Jihad group, said in a statement that it could “confirm the continuation of the fighting.”

Most of the missiles were intercepted and there were no reports of serious casualties, according to the Israeli ambulance service.

In a separate statement, Daoud Shehab, a spokesperson for Islamic Jihad, said the “current battle will not end in a day or two, and it will continue to deplete the occupation entity.” He also said there were no talks between the two sides at present.

The latest round of violence between Israel and Palestinian militants was sparked by the capture this week of senior Islamic Jihad commander Bassam al-Saadi in the West Bank.

Fighting began Friday as Israel warned residents in phone calls ahead of its fighter jets dropping two bombs on the house of an Islamic Jihad member, flattening the two-story structure in west Gaza City and badly damaging surrounding homes.

The IDF said it had targeted Taiseer al-Jabari, the senior commanding officer of the Palestinian Islamic Jihad’s northern Gaza division. The Palestinian Health Ministry later confirmed that Jabari was among the dead.

In a separate statement Saturday, the ministry said that 14 Palestinians, including one child, had died, and at least 110 people had been…