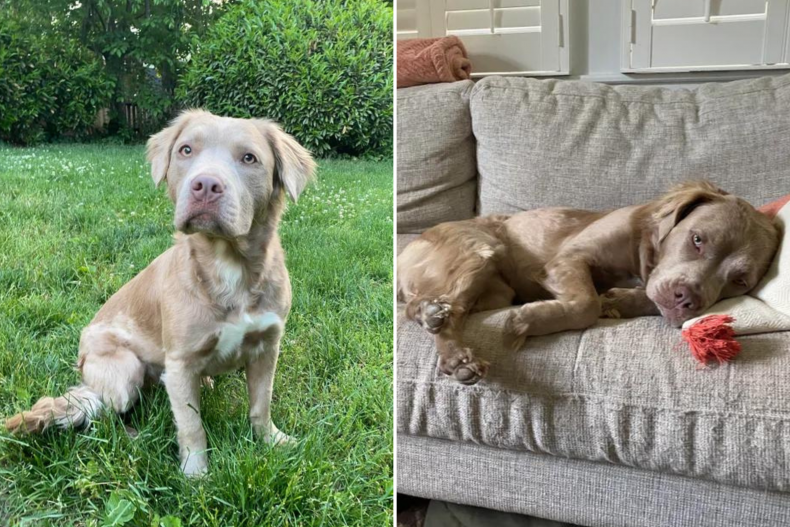 An unusually fluffy rescue dog has captured viral attention this week after her owners shared a picture of her on sharing site Reddit.

The American Society for the Prevention of Cruelty to Animals (ASPCA) reports that in the U.S., approximately 4.1 million animals are adopted each year, including 2 million dogs and 2.1 million cats.

While 6.3 million animals enter shelters across the country each year, around 69 million Americans report owning at least one dog, making them the most popular pet in the U.S.

On Monday, Greta Weber from Asheville, North Carolina, shared pictures of 1-year-old Ruby the pit bull on Reddit’s popular r/rarepuppers forum where it has received over 31,000 upvotes and hundreds of comments.

Alongside the caption: “My pittie has a rare recessive long-haired gene that makes her fluffy,” images of Ruby and her extra fluffy fur have delighted thousands.

Weber told Newsweek: “We adopted her last September from a local shelter. When we adopted her the shelter said they thought she was a Pitbull mixed with a Retriever and a Labrador—we assumed they were right because she really looked like all three breeds, but we wanted to get a DNA test because we were curious if there were other breeds in her.”

When the DNA results came back though, her owners were shocked to find she was 100 percent American pit bull terrier.

The American pit bull terrier is not recognized as a breed by the American Kennel Club (AKC), a decision that is thought to be related to their reputation for dog fighting in the 1800s.

The medium-sized dogs have a well-defined muscle structure and are still reported as being used for illegal dog fighting in the U.S. But despite their reputation, most pit bulls are fun, gentle, and extremely loyal pets that become great family members.

“We were very surprised,” said Weber, recalling when they opened Ruby’s DNA results: “I think we googled something like ‘how can a Pitbull have long hair?’ and that’s when we found that long-haired genes can be recessive and rarely expressed.”

Getting a DNA test for your pet has become more popular in recent years, in line with a boom in at-home DNA testing for humans, pet owners and breeders are turning to companies to carry out simple tests that can determine breed, parentage, and establish whether an animal is predisposed to any genetic conditions.

Released this week, the Global Pet…