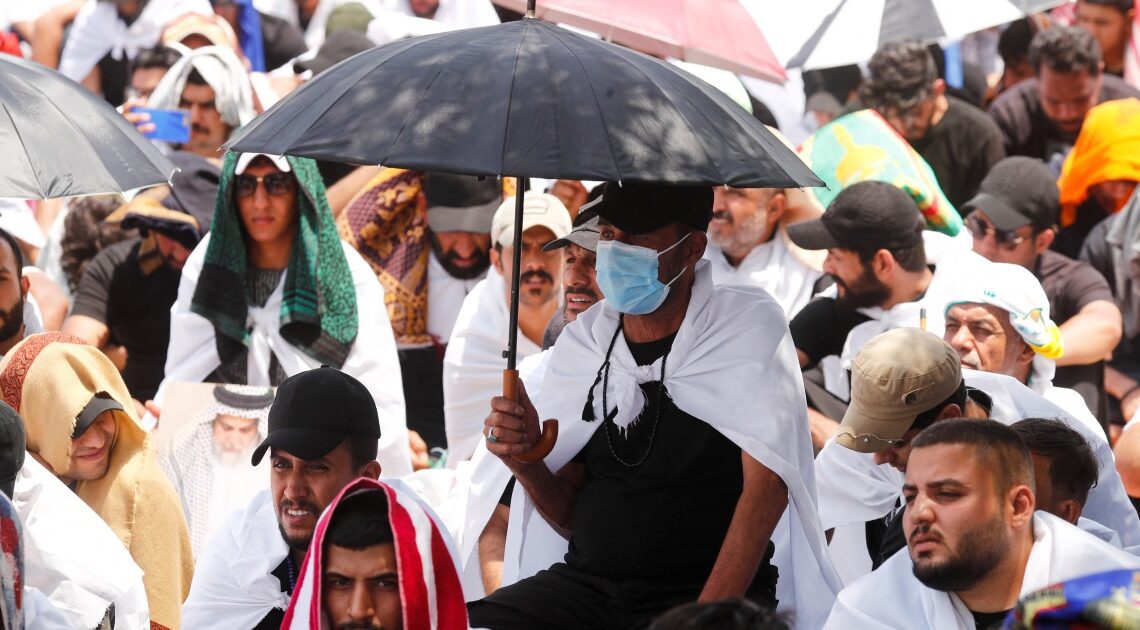 Some wrapped their faces in cloths soaked in water, others brought bottled water to pour over their heads, many carried umbrellas – all in an effort to bring some relief from the scorching heat.

As the sun beat down on the crowds of thousands packed into the largely uncovered square in central Baghdad, some began to faint.

“It was so hot,” Haafez Alobaidi told Al Jazeera after the prayer called by influential Shia leader Muqtada al-Sadr.

“When the air was still, I felt like I was being roasted in an oven,” Alobaidi said.

“When there was breeze, it felt like a hairdryer was blowing in my face … full force,” he said.

“You thought living in Iraq would make you get used to this kind of weather, but no, no human beings should live in this weather.”

Heatwaves are sweeping across Iraq.

Temperatures have soared up to nearly 50 degrees Celsius in Baghdad almost daily, and in the southern city of Basra, temperatures have come close to 53 degrees – dangerously high in a country that has a chronic lack of basic infrastructure and services, and is also embroiled in a political crisis.

Every summer, Iraq experiences heatwaves of varying intensities, and this year is no exception.

But this year the intense heat has also been exacerbated by a heated political crisis: A deadlock in parliament that has paralysed the country, including leaving Iraq without a government budget to properly allocate expenses to essential services such as the electricity supply.

Since last year’s parliamentary elections, Iraq has endured more than 300 days without a government.

Though winning the most seats in the parliament, al-Sadr failed to form a government to his liking. He later withdrew his representatives from parliament, resulting in a political stalemate.

Al-Sadr recently flirted with the idea of holding another election. His supporters stormed the parliament building last weekend in Baghdad and remain in occupation there, further complicating the political crisis.

Alobaidi, who participated in the mass prayer on Friday and also helped storm the parliament, said the exertion had nearly caused him to suffer heat stroke.

Asked why he continued to protest in such blazing heat, Alobaidi rose his arm and said: “all for Muqtada!”