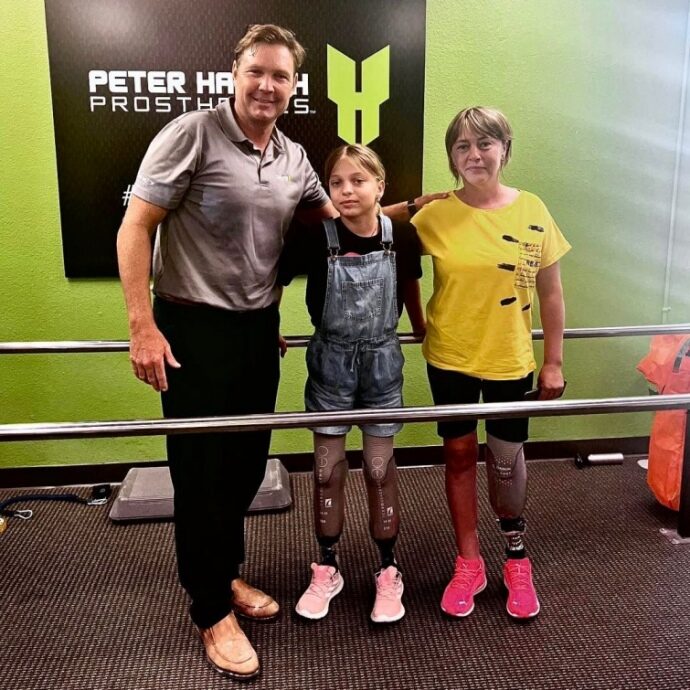 In April, the Russians fired rockets at the railway station in Kramatorsk. The Stepanenko family – Nataliia, her 11-year-old son Yaroslav and her daughter Yana – were injured in the attack. Nataliia’s leg was torn off and both of her daughter’s legs were torn off; her son was miraculously unhurt.

After a month of rehabilitation in hospital in Lviv, they were evacuated to the United States.

According to the mayor, training prostheses were created for them as part of a programme by the Right to Walk Foundation. Nataliia and Yana are already learning to take their first steps.

Nataliia and Yana with a doctor in the USA.

“Yana’s been to hell and back! Putin wants to stop Ukraine, but he can’t stop an 11-year-old girl. Look at her! She was blown up, but she’s indestructible!” rehabilitation therapist Peter Harsch says of his patient admiringly.

He works with Nataliia and Yana almost every day.

Harsch pointed out that the rehabilitation process will be lengthy – at least a year, during which the family will live in the USA.

The Stepanenkos hope that they will return to a peaceful Ukraine.

It will be recalled that in July, Ukraine and the US agreed on a programme of prosthetics for injured children.  In addition to treatment, they will also receive mental health counselling.