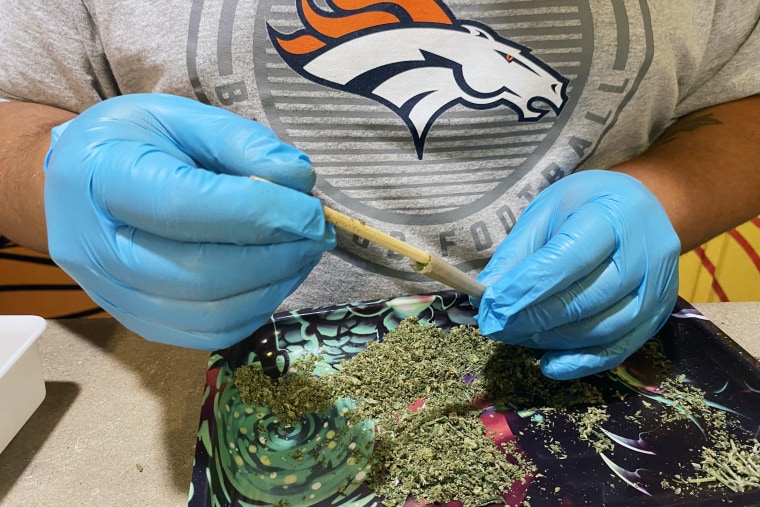 PINE RIDGE, S.D. — In a growing number of U.S. states, people can both drink alcohol and legally smoke recreational marijuana. In others, they can use alcohol but not pot. But on the Pine Ridge Indian Reservation in South Dakota, the opposite is true: Marijuana is legal, but booze is banned.

Citizens of the Oglala Sioux Tribe overwhelmingly voted in 2020 to legalize recreational and medical marijuana on their sprawling reservation, which has prohibited the sale and consumption of alcohol for more than 100 years.

Customers visiting a dispensary on a recent Friday said they view marijuana as a safe and natural way to obtain relief from mental health disorders and chronic illnesses, which are common among tribal citizens. But they said alcohol has wreaked havoc on the health, safety and life expectancy of tribal members.

“Cannabis is a natural plant that comes from the Earth — and our people lived off the land, and they got their medicine from the land,” Ann Marie Beane said while shopping at the No Worries dispensary in the small town of Pine Ridge. “Our Indigenous people, they suffer a lot from diabetes and cancer and various other illnesses, but the cannabis really helps them.”

Beane and her 22-year-old daughter said they use marijuana to ease their anxiety.

Marijuana use can lead to physical and mental health problems, but shoppers at the No Worries store said it’s less dangerous than alcohol, meth and opioids. Those drugs lead to high rates of premature deaths on the reservation through car crashes, violence and disease.

The Pine Ridge Reservation, established in 1889, is spread across more than 2 million acres of small towns, ranchland, prairies, and otherworldly badland formations. The U.S. Census Bureau says about 20,000 people live there, but community members say that’s a vast undercount and that the population could be as high as 40,000.

Alcohol has been illegal there for most of the reservation’s history, but that hasn’t stopped bootlegging and abuse. “It’s killing our youth — it’s killing our future generation,” Beane said.

The Oglala Sioux Tribe said in a 2012 lawsuit that about 25% of children born on the reservation had health or behavioral problems caused by exposure to alcohol in the womb. The lawsuit was filed against now-shuttered beer stores across the border in Nebraska.

The average life expectancy is just 64.5…