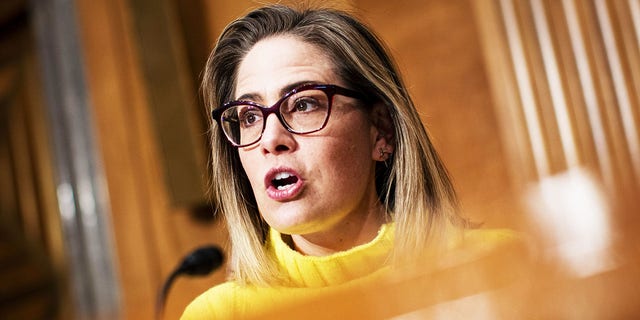 Progressive groups across the country are at odds with a decision made by Sen. Kyrsten Sinema, D-Ariz., to remove the carried interest tax loophole from a social spending and tax bill that is expected to pass through the Senate, claiming she is providing a “tax break” for the wealthy.

The Arizona Democrat announced Thursday that she would “move forward” in supporting the Inflation Reduction Act, the reconciliation package Senate Democrats unveiled last week. As part of the agreement, she successfully removed the carried interest tax provision, which was largely used by wealthy Americans.

In a series of statements provided to Fox News Digital, progressive groups took aim with Sinema’s decision, arguing that the loophole has historically benefited rich Americans and should be eliminated.

Sen. Kyrsten Sinema, a Democrat from Arizona, is facing backlash from progressives over her move to eliminate the carried interest tax loophole used by wealthy Americans from the Inflation Reduction Act.
(Al Drago/Bloomberg via Getty Images)

“Senator Sinema’s move to protect a loophole that only benefits wealthy Wall Street financiers sounds more like a job application for after she loses her next primary than an attempt to help everyday Arizonans or Americans,” said Carrizales. “Fortunately, despite Sinema, Democrats are on track to pass a law for the first time in decades that finally forces tax-avoiding corporations to pay taxes — which lowers the share of the burden on working families.”

Frank Clemente, executive director for Americans for Tax Fairness, said Sinema’s decision is an “affront” to Americans who pay their taxes.

“Senator Sinema’s insistence on maintaining the carried interest tax loophole is an affront to everyone who pays their fair share of taxes,” said Clemente. “Her support for a tax break that exclusively benefits ultra-wealthy money managers shocks the conscience.”

Similarly, Americans for Financial Reform, a…