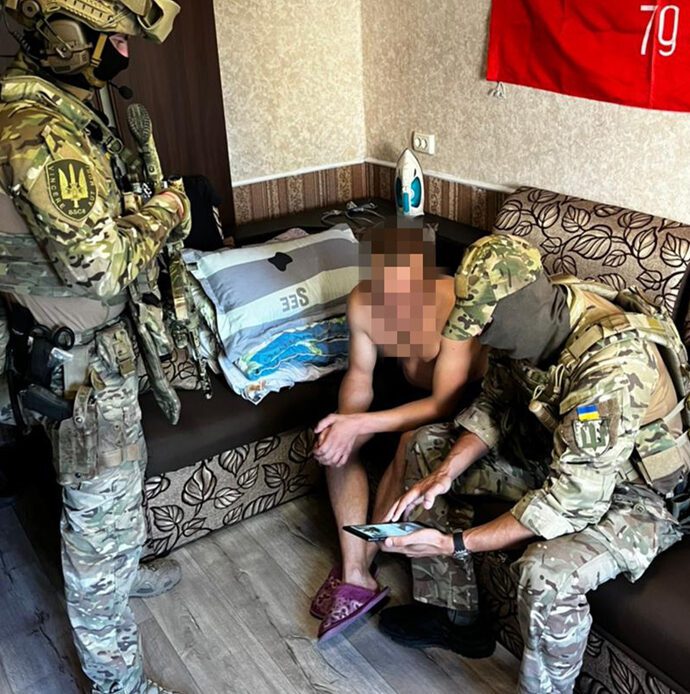 Two Russian collaborator networks have been discovered and their members  detained in the Donetsk Oblast. They were scouting the positions of the Armed Forces of Ukraine near the eastern front and passing this information to the Russian forces.

Quote from the prosecutor’s office: “Detention has been chosen as a preventive measure for  the residents of Bakhmut and Sloviansk, who we have grounds to suspect of unauthorised dissemination of information about the movement and location of the Armed Forces of Ukraine. They have the option of bail of UAH 744,300 [USD 18,700] and UAH 189,480 UAH [USD 4,700] (according to Part 2 of Article 114-2 of the Criminal Code of Ukraine).”

Details: According to the investigation, in July 2022, two citizens of Ukraine gave pro-Russian groups, via messenger,  information about servicemen of the Ukrainian Armed Forces who were stationed in the Donetsk Oblast.

The suspects shared data on the movement of military equipment and vehicles, as well as the locations of Ukrainian defenders.

Another Russian agent network made up of 6 residents of the Donetsk Oblast has been liquidated by the Security Service of Ukraine.

A group of people who were recruited after the beginning of the full-scale invasion of Ukraine was gathering intelligence on the deployment and movement of the units of the Armed Forces of Ukraine in the cities of Sloviansk, Kramatorsk and the district of Pokrovsk in the Donetsk Oblast.

The information was passed to Russian invaders through specially created Internet platforms as coordinates on electronic maps accompanied by photo and video recordings.

In addition, the suspects “reported” to the aggressors about the consequences of Russian forces’ missile and bomb strikes, artillery shelling of the region and the extent of the destruction of residential buildings and civilian infrastructure facilities.

It has been established that one of the “liaison” Russian agents was an “official” of the so-called “supreme court of the DPR” [self-proclaimed Donetsk People’s Republic], involved in the persecution and illegal imprisonment of Ukrainians in the temporarily occupied territory of the Donetsk Oblast.

Also, during the investigation in the Pokrovsk district, security…