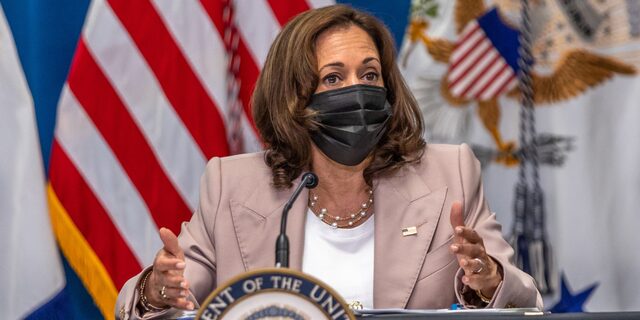 “Another note of hypocrisy coming from Kamala Harris and this administration is you mentioned during her illustrious record as attorney general in California…she kept prisoners in prison longer than their sentences to use them as free slave labor yet at the same time these very same people are condemning other countries for doing the exact same thing,” Gabbard told Fox News host Will Cain.

Griner was sentenced by a Russian court to 9 years in prison this week after being caught with a cannabis vape pen at an airport near Moscow earlier this year.

The sentence earned widespread condemnation from U.S. officials including Harris who said she is working to secure Griner’s release.

US Vice President Kamala Harris speaks during a meeting with North Carolina state legislators on reproductive rights at the Carole Hoefener Center in Charlotte, North Carolina, US, on Thursday, July 21, 2022.
(Grant Baldwin/Bloomberg via Getty Images)

“With today’s sentencing, Russia continues its wrongful detention of Brittney Griner. She should be released immediately,” Harris tweeted on Thursday. “@POTUS and I, and our entire Administration, are working every day to reunite Brittney, as well as Paul Whelan, with loved ones who miss each of them dearly.”

Gabbard, who pointed out that she also opposes Griner’s sentence, said that the “thing that struck me” about the tweet from Harris is that her administration has not expressed the same sentiment for people accused of marijuana crimes domestically.

Brittany Griner is escorted by police before her hearing in Russia.
(Getty Images)

“Where is your outrage for your fellow Americans who are sitting in prison today here in the United States of America for minor marijuana violations,” Gabbard said. “How come you are not fighting as hard for them to be returned home and reunited with their families as you are for Brittney Griner.”