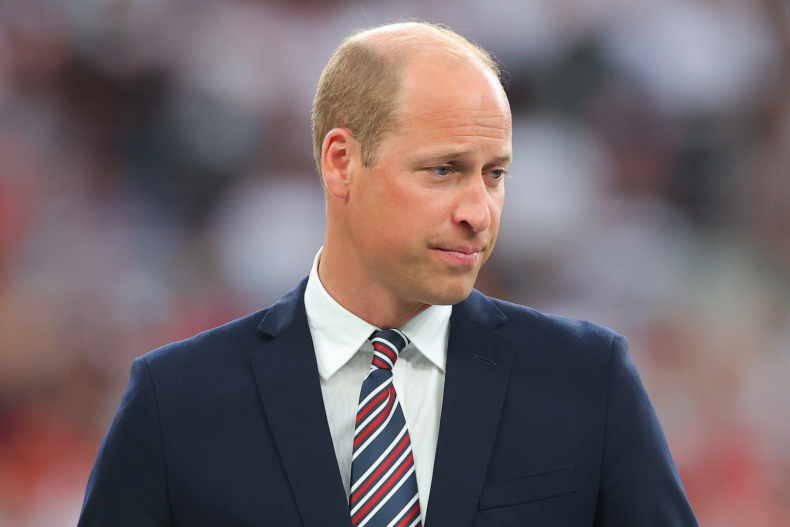 Prince William is being viewed as a “symbol of the establishment” which has led to a series of incidents that have seen him booed during two high-profile sporting events, according to a discussion on a new episode of Newsweek‘s The Royal Report podcast.

Chief royal correspondent Jack Royston and royal commentator Kristen Meinzer discussed criticism faced by the prince during the UEFA Women’s Euros championship soccer final in Britain last month, with the royal’s perception by young people being cited as a potential hurdle for him to overcome moving forward.

Discussing the women’s soccer final at which William presented the trophy at Wembley Stadium in his capacity as president of the Football Association (FA), Royston discussed a viral video showing William being booed by spectators at a British pub.

“A pub in Sheffield booed [William] when he came on screen,” he explained. “I was messaging with one of the people who was in the pub at the time who said basically it was an anti-establishment feeling and that Prince William basically is seen as a symbol of the establishment.”

Royston then went on to suggest that Prime Minister Boris Johnson would also be similarly booed as an “establishment” figure but added: “obviously from William’s point of view he probably wouldn’t really want to be lumped in with divisive figures like Boris.”

This is not the first time this year that William has been booed by sports fans. In May during the FA Cup soccer final between Chelsea F.C. and Liverpool F.C. the prince was audibly booed and jeered by fans as his presence was announced over loudspeakers. The booing also continued through Britain’s national anthem; God Save The Queen.

This incident provoked widespread discussions with Liverpool fans being identified as those who mainly contributed to the booing leading to their condemnation by public figures, including the prime minister, who said via a spokesperson: “It was a great shame that as we are marking 150 years of the FA Cup, an event that brings people together, that a small minority chose to act in that way.”

“So this is the second time in several months that this has happened to William,” Royston told Meinzer, “posing a question for William: how…