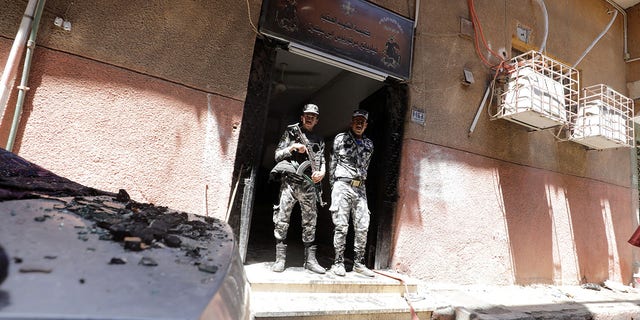 Children were among the dozens of worshippers killed Sunday when a fire ripped through a Coptic church in Cairo, according to reports.

The blaze tore through the Abu Sefein church in the densely populated neighborhood of Imbaba, killing at least 41 people and injuring at least 14 others, Egypt’s Coptic Church said, citing health officials for the casualty toll.

Two security sources told Reuters that 5,000 worshippers were gathered at the church when the fire broke out and blocked the entrance, causing a stampede.

The sources said most of those killed were children.

Security members stand at the scene where a deadly fire broke out at the Abu Sifin church in Cairo’s Imbaba neighborhood on Sunday.
(Reuters/Mohamed Abd El Ghany)

The cause of the blaze was not immediately known. Police said an initial investigation blamed an electrical short-circuit.

More than a dozen firefighting vehicles fought to put out the flames while ambulances rushed victims to nearby hospitals.

People and policemen stand near the scene where a deadly fire broke out at the Abu Sifin church in Cairo’s Imbaba neighborhood on Sunday.
(Reuters/Mohamed Abd El Ghany)

“I am closely following the developments of the tragic accident,” el-Sissi wrote on Facebook. “I directed all concerned state agencies and institutions to take all necessary measures, and immediately to deal with this accident and its effects.”