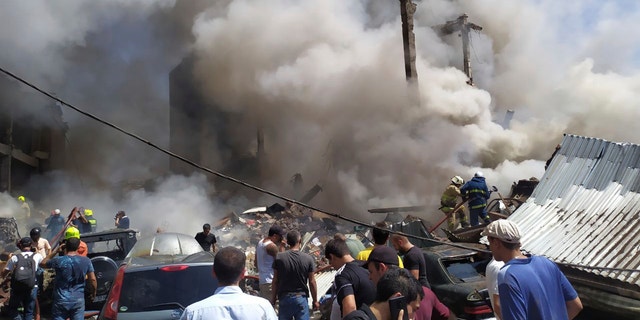 A large explosion rocked a market in the Armenian capital of Yerevan on Sunday.

Emergency responders say the explosion occurred inside a building where fireworks may have been sold at the Surmalu market. First responders are on the scene and say an unknown number of people are trapped under rubble.

Authorities have not officially stated a cause for the explosion at the time of this report, nor have they released details on injuries.

Smoke rises from Surmalu market about two kilometers (1.2 miles) south of the center Yerevan, Armenia, Sunday, Aug. 14, 2022. A strong explosion hit a large market in the capital of Armenia on Sunday, setting off a fire and reportedly trapping people under rubble. The Interfax news agency cited Armenia’s emergency service as saying the explosion occurred in a building at the Surmalu market where fireworks were sold. (AP Photo/Daniel Bolshakov)

The Associated Press contributed to this report. This is a developing story. Check back soon for updates.