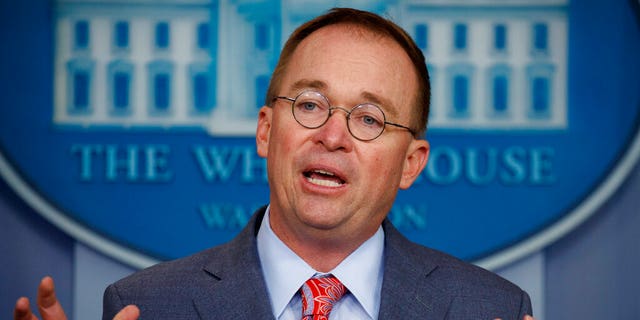 Former acting chief of staff for President Donald Trump Mick Mulvaney said he hopes Trump does not run in 2024 in a Monday evening appearance on Newsnation’s, “Banfield.”

“I don’t think we should be offering Donald Trump,” Mulvaney told anchor Ashleigh Banfield. “I also think it’s also a time actually for the next generation to take over anyway.”

Mulvaney, who resigned from his White House position in January 2021 citing the Jan. 6 riots, said he would have a “hard time” voting for the former president if Trump were the 2024 Republican candidate.

“It’s time for Donald Trump to sort of go to the sidelines, continue to push the policies that made him so popular and redefined my party, but we can have all the policies without the baggage,” Mulvaney said.

REPUBLICANS ‘NEED TO PULL BACK ON CASTING JUDGMENT’ ON FBI AFTER TRUMP MAR-A-LAGO RAID: GOV. HUTCHINSON

The former White House official also stated Trump could be the only candidate with the potential to lose to President Joe Biden or any other Democrat candidate come 2024. Despite the current economic state of the country, Mulvaney said Trump could be the “only person who could lose that election.”

Mulvaney’s comments come a little over a week after Trump’s Mar-a-Lago home was raided by FBI agents conducting a search warrant on Aug. 8. The unprecedented raid is in connection with materials the former president allegedly took with him to his Florida home after his presidency concluded. Trump has been disputing the classification of the records seized, stating they have been declassified.

“I’ve been critical of the president where I thought he deserved it, but I think right now the former president of the United States wins on the benefit of the doubt, and it’s up to the DOJ to prove that there was a legitimate purpose to this invasion of the president’s home,” Mulvaney told Banfield.

In his first interview since the raid, Trump told Fox News Digital he “will do whatever” he can “to help the country.” He said his representatives reached out to the Department of Justice offering help following the raid.