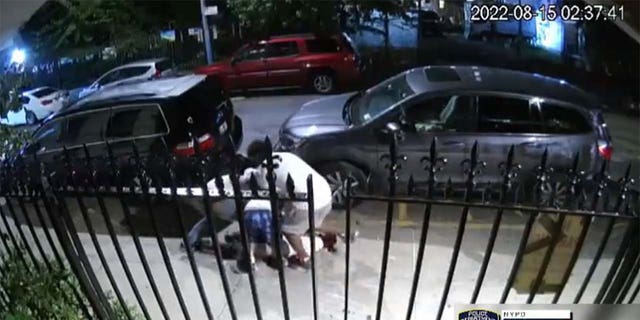 Police are searching for suspects in the brutal Bronx beating and robbery of a 67-year-old last week that was caught on video.

The NYPD said the beating happened around 2:37 a.m. in front of 353 East 151 Street on August 15. A 67-year-old man was walking when a group of individuals approached him and began to chase him.

A 67-year-old man’s beating and robbery in the Bronx caught on video.
(NYPD)

The individuals pushed the victim to the ground, assaulted him, forcibly removed his backpack, and stole around $300 in cash before fleeing the scene.

As the victim was trying to pick himself up, individuals returned, continued beating him, and forcibly removed his cell phone. The individuals fled again, this time heading eastbound on East 151 Street.

Police said the victim sustained numerous injuries to his head and face and lost a tooth. He was transported to NYC Health & Hospitals Lincoln and is said to be in stable condition.

The suspects remain at large. Police described them as males in their late teens to early 20s, with slim builds and dark complexions. Three of the suspects were wearing white t-shirts while the fourth was wearing a black hooded sweatshirt.

Anyone with information on this incident is being asked to call the NYPD’s Crime Stoppers Hotline at 1-800-577-8477.