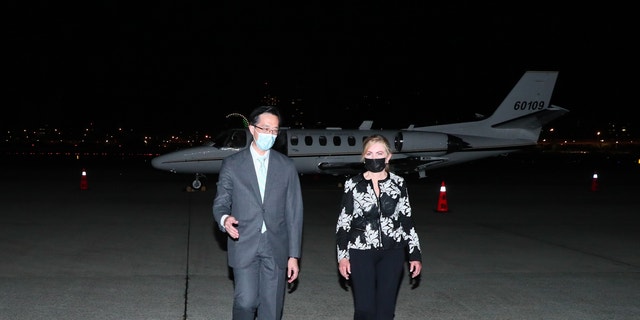 EXCLUSIVE: Sen. Marsha Blackburn spoke exclusively with Fox News Digital while en route to Taiwan for a trip she hopes sends a signal to the Chinese government that American lawmakers aren’t afraid to stand up to the communist country.

“We have been planning this trip for the last few months,” Blackburn told Fox News Digital while her plane refueled in the Philippines Thursday. “And we’re doing it because Taiwan is getting a great deal of pressure from the Chinese Community Party (CCP). They are bullying Taiwan. And we know it’s important for Taiwan that we’re their friend, and that we’re going to be here to help and support them. But it’s also important for islanders of the Pacific Island communities to know that we’re going to be here to support them as they need to be. Now, they prefer having the U.S. as the primary partner as opposed to having to deal with the communist Chinese.”

The senator met with Taiwan President Tsai Ing-wen at the Presidential Office in Taipei and Foreign Minister Joseph Wu Chao-hsieh at the Taipei Guest House. She also delivered remarks at Taiwan’s Ministry of Foreign Affairs (MOFA) Institute of Diplomacy and International Affairs (IDIA). In addition, she had a meeting with the American Chamber of Commerce in Taiwan.

Blackburn, who traveled solo without any other lawmakers on her previously unannounced trip to Taiwan, said that she thinks even more legislators should travel to the country.

“I think more lawmakers should come. I think it’s important to do. It’s important of them to see this region,” Blackburn told Fox News Digital.

“When you talk about the Indo-Pacific, and we have warned at the aggression of the CCP specifically in this region, and the way they’re aggressively pushing against these Pacific Island nations. And we know, and it is important for us to be present, to make certain that Taiwan has what they need to defend themselves,” Blackburn said. “The thing is, as you meet with them, they say the U.S. is their preferred partner and especially with the island nations and their traditional partners, Australia and New Zealand. And making certain that they are able to retain their independence and their freedom and not come under the pressure from the Chinese Communist…