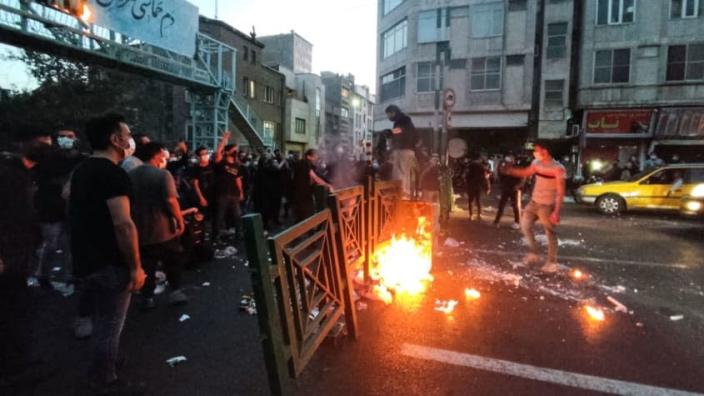 Mass protests are taking over the streets in at least a dozen cities across Iran, with demonstrators showing their outrage over the death of 22-year-old Mahsa Amini while in police custody.

Amini was arrested in Tehran last Tuesday while visiting the city with her family. She was detained by the morality police, accused of violating the strict dress code for women. Amini died on Friday, and her father told reporters that authorities claimed she had a heart attack and went into a coma. He said doctors refused to let him see his daughter, who had no pre-existing conditions.

The protests began over the weekend and have grown every day since, with The Associated Press estimating that at least nine people have died in the demonstrations. Protesters are chanting “Death to the dictator!” and women, who must wear headscarves under Iranian law, are taking them off and burning the fabric in the streets. Videos circulating online show Iranian security forces firing water canons and tear gas at the crowds.

This is the most serious unrest to hit Iran since the 2019 demonstrations against high gas prices, AP notes, and internet access was largely blocked on Wednesday and Thursday, with both Instagram and WhatsApp reporting outages.

The United States, United Nations, and European Union have all condemned Amini’s death, with the U.S. also imposing sanctions against the morality police and Iranian security agency leaders who “routinely employ violence to suppress peaceful protesters.” Iran’s Revolutionary Guard, which asked judges on Thursday to prosecute “anyone who spreads fake news and rumors” about the unrest, said in a statement the protests are being fueled by “Iran’s enemies.”