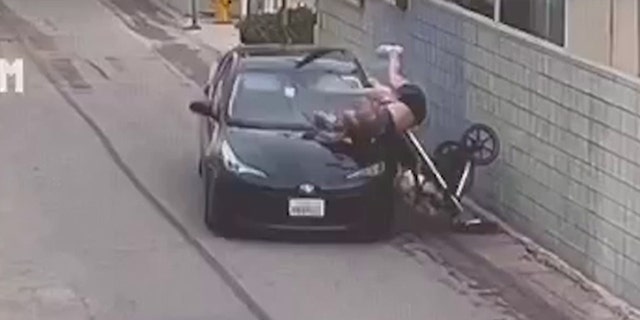 GRAPHIC CONTENT WARNING: A Los Angeles judge reached no decision Thursday after a teen who admitted to mowing down a mother and her 8-month-old in a stolen car asked for an early release from a five- to seven-month sentence in juvenile probation camp.

In the past few months, he’s also been involved in at least 14 fights, according to authorities, and has writeups for allegations of misconduct, disobedience, destructive language and defiance of authority, although some probation reports praised his behavior.

“The reports from his time in probation show that he is not rehabilitated, and he shouldn’t be released early,” Shea Sanna, the deputy district attorney who argued against early release, told Fox News Digital Thursday.

The suspect, who is not being identified because of his age, appeared in court with his mother.

After a delay over whether the victim and members of the media could observe the proceedings, things got underway. The defense introduced a motion for early release. However, Sanna raised issue with many of its claims, and the judge ultimately chose to continue the proceedings to Sept. 28 – when the people who wrote the probation report will be asked to testify under oath.

Rachel said she had not been given an opportunity to speak Thursday.

The driver was recorded on surveillance video veering into Rachel and her infant, bowling them over and then trying to flee before a good Samaritan in a pickup truck rammed him off the road.

Photos taken at the scene show the driver as a thin, White male wearing clothes that appeared too big and a “Scooby Doo” neck tattoo. His eyes were barely open as he spoke with police outside the stolen car. He was out on probation at the time for poisoning a high school girl.

After striking Rachel and her 8-month-old, the wrong-way driver collided with a pickup truck.
(Los Angeles County)

While the 8-month-old victim miraculously escaped serious injury, photos showed a tire-tread-shaped bruise on the back of his…