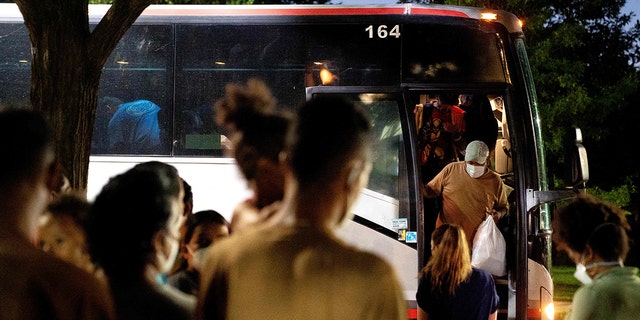 A poll released Thursday indicates that a majority of Texas residents and more than 40% of Hispanic and Latino voters in the state support efforts from leaders in the state to bus illegal migrants to other areas of the country.

The statewide poll from Spectrum News and Siena College — which surveyed 651 likely Texas voters — revealed that 41% of Hispanics in the state favor efforts by the state to transport illegal migrants to cities like New York and Chicago, while 44% of Hispanics oppose the process.

Migrants from Venezuela, who boarded a bus in Del Rio, Texas, disembark within view of the US Capitol in Washington, DC, on August 2, 2022.
(STEFANI REYNOLDS/AFP via Getty Images)

The results from the survey come after Abbott and other leaders in the state orchestrated efforts this year to send numerous buses loaded with illegal migrants from Texas to other parts of the country in spite of President Biden’s handling of the crisis along the southern border. The move has sparked backlash among city leaders who have dealt with the incoming migrants, including New York City Mayor Eric Adams and D.C. Mayor Muriel Bowser.

Asked about their views of Operation Lone Star, an operation launched by Gov. Greg Abbott last year that dispatched thousands of state troopers and National Guard members with the power to arrest trespassing migrants, 45% of Hispanic voters said they strongly or somewhat support the effort. In contrast, 47% of Hispanic voters stated they somewhat oppose or strongly oppose the operation.