Nazi sympathizer and Army reservist who stormed the Capitol sentenced to 4 years in Jan. 6 case 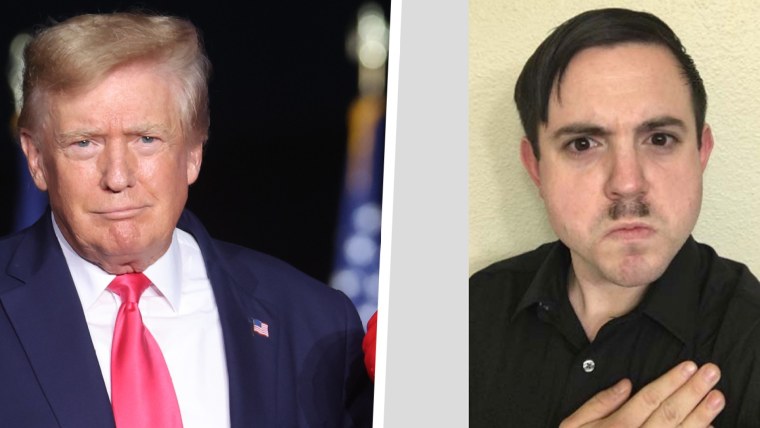 WASHINGTON — A Jan. 6 rioter who has dressed up as Adolf Hitler and held a security clearance was sentenced to four years in federal prison Thursday.

Timothy Hale-Cusanelli, 32, of New Jersey, who was an Army reservist when he stormed the U.S. Capitol in January 2021, was convicted in May after he failed to convince jurors that he didn’t know that Congress met at the Capitol, a claim he made on the stand to avoid a conviction for obstruction of Congress.

“I know this sounds idiotic, but I’m from New Jersey,” Hale-Cusanelli told jurors when he said he didn’t know Congress met at the Capitol. “I feel like an idiot, it sounds idiotic, and it is.”

U.S. District Judge Trevor McFadden, a Trump-appointed judge who oversaw Hale-Cusanelli’s trial, had said his testimony was “highly dubious” and indicated that he was open to a sentencing enhancement. McFadden said Thursday that the claim that Hale-Cusanelli didn’t know Congress met at the Capitol was a “risible lie” and an “obvious attempt” to avoid accountability.

McFadden said Hale-Cusanelli “absolutely knew” that Congress met at the Capitol, noting that he had even told his roommate that he was outside the House of Representatives on Jan. 6. McFadden also said he was “appalled” by the language Hale-Cusanelli used to a female officer on Jan. 6, in which he called her an unprintable word.

Hale-Cusanelli told the judge ahead of his sentencing that he owed members of Congress and law enforcement an apology.

“I disgraced my uniform and I disgraced the country,” he said. “I do say ugly things” that are “repugnant” in the eyes of many, he said. He assured the judge that he would “never see my face in court after this” and that the time he spent in solitary confinement had changed who he was.

Federal prosecutors had sought 6½ years in prison. Hale-Cusanelli was convicted on all five counts he faced, including a felony charge of obstruction of an official proceeding. McFadden found, however, that a lower sentencing range should apply because interfering with the certification of the Electoral College vote didn’t qualify as interfering with the “administration of justice.”

In a government sentencing memo, federal prosecutors referred to Hale-Cusanelli’s “enthusiasm for civil war and his well-documented history of violent rhetoric” and argued that significant prison time is warranted because of his background and his false statements on the stand.

“A student of history and government who had previously…