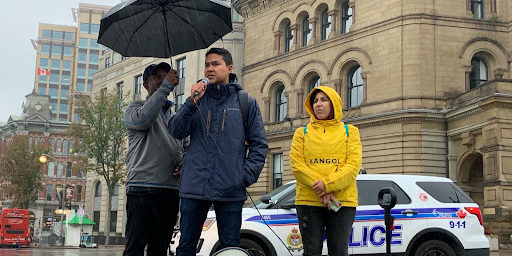 Temperatures are dropping, leaves are changing and, now that pandemic restrictions have largely been lifted, universities are bustling with students. As the school year starts to pick up momentum, many international students who are seeking to enter the workplace are facing the reality of an exploitative immigration system.

International students are treated like cash cows by universities, according to Sarom Rho, an organizer with Migrant Students United (MSU). MSU is a part of the Migrant Workers Alliance for Change, a workers rights organization with a membership of migrants in farm work, care work and low wage work. Rho said the labour of current and former international students, refugees, and undocumented people often fall into the low wage category.

“For current international students, what we’re seeing here is a complete cash grab that’s targeting racialized, poor and working class families around the world,” Rho said in an interview with rabble.ca. “We’re mostly coming from the Global South. There is a bait and switch system where people are called to show up under the promise of getting permanent residency, but end up walking through a minefield of labor abuse, immense stress and exploitation.”

Restrictions on study permits and high tuition leads international students into illegalized work, Rho said. She explained that for those who work off-campus, 20 hours of work is not enough to pay the tens of thousands of dollars in tuition.

“There are nearly 800,000 current and former international students in the country and many are facing exploitation at work, lack of support at school, increasing tuition fees, and restrictions on their permits,” Rho said.

For on-campus jobs, hour restrictions do not exist, according to the Government of Canada’s website. This removes the competitive disadvantages for international students, according to Jordan Hartshorn, who works for the International Student and Study Abroad Centre at the University of Saskatchewan.

Even though on campus job opportunities remove barriers, not all international students will be able to find…